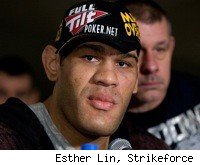 d a brutal onslaught from Mike Kyle at the start of their fight on Saturday night's Strikeforce card, coming back from nearly getting knocked out at the start of the first round to winning a technical knockout midway through the second.

Although Kyle usually fights at light heavyweight and Silva is a big heavyweight, the size difference didn't seem as significant as one might expect, and within 30 seconds of the first round Kyle had landed a huge punch on Silva, knocked him to the ground and badly hurt him. Kyle jumped on top and landed punches in bunches on the ground, although Silva looked composed and pulled Kyle into his guard. Once Silva had weathered the storm he was OK, and Kyle seemed to run out of steam as the first round wore on, but it was a first round that Kyle definitely won, maybe even by a 10-8 score.

At the start of the second Kyle went on the attack again, going for a takedown, but Silva sprawled and ended up on top of Kyle on the ground. Silva landed some hard punches in the ground and pound and appeared close to making Kyle tap out with an anaconda choke, but Kyle held on and survived. Silva then worked his way to the full mount, however, landed some very hard punches that stunned Kyle, and gave the referee no choice but to jump in and stop the fight at 2:49 of Round 2.

It was an impressive comeback win for Silva, whose pro MMA record improves to 15-2. But it was also a solid showing from Kyle, who took the fight against the much bigger man on short notice and gave it all he had before ultimately getting beaten. Kyle falls to 18-8-1.