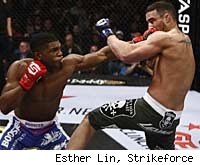 With a vicious punch in the first round, Paul Daley knocked Scott Smith cold on Saturday night's Strikeforce card.

There wasn't anything fancy about this fight. They stood in front of each other and threw punches, and within the first minute there was the first knockdown, with Daley hitting Smith hard and sending him flying against the fence. As he so often does, Smith recovered quickly, however, and got back to his feet.

But it wasn't long before Daley landed an absolutely brutal left hook to Smith's head, putting Smith face-first on the canvas and unconscious.

He then added, referencing his explosive nickname, "Semtex is for real."

Smith did get back up and walk out of the cage afterward, and he appeared to be OK. But that knockout loss was brutal.

For Daley, who was fired by the UFC after taking a sucker punch at Josh Koscheck following his loss to Koscheck this year, it was an emphatic return to the national stage. It was also one of the best wins of his pro MMA career, improving his record to 26-9-2.

Daley said that he'd next like to fight KJ Noons, and then after that he hopes to take on Strikeforce welterweight champion Nick Diaz.

If he keeps fighting like he did on Saturday night, Daley can become a Strikeforce champion soon.


Daley's win was the most impressive highlight of a very impressive night for Strikeforce, which put on an exciting, hard-hitting show on Showtime. In the main event, Strikeforce's big free agent acquisition from early this year, Dan Henderson, earned a very big win with an impressive knockout of Renato "Babalu" Sobral. Although Henderson's knockout wasn't quite the highlight-reel explosiveness that Daley provided, it was a great showing for Henderson, who bounced back nicely from his April loss to Jake Shields.

Strikeforce also got a big showing from Robbie Lawler, who needed just 50 seconds to deliver a brutal knockout punch to Matt Lindland. Lawler is one of the hardest punchers in the middleweight division, and this was his second first-round knockout of 2010.

And in heavyweight action, Antonio "Bigfoot" Silva had a solid second-round stoppage of Mike Kyle. Strikeforce has promised that 2011 will be the year that it finally showcases its heavyweight division, and Silva showed that he belongs in the mix, winning an exciting fight on a very exciting fight card.