Dan Henderson is back, an 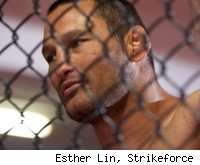 d he has his first win as a Strikeforce fighter.

"I prepared for this fight and my body feels a little better than it has in a long time," Henderson said afterward. "I knew it would come, but it came a little faster than I expected."

Babalu employed plenty of kicks in the early going, attempting to keep Henderson to the outside. Babalu knows Henderson has that big right hand and wanted to avoid it, but he wasn't able to avoid it for long: The fight lasted just 1 minute, 53 seconds.

The win improves Henderson's record to 26-8. At age 40, Henderson said he thinks he has plenty more big fights left in him.

"A lot of people thought I was done in this sport," Henderson said. "I'm a long way from done. I'll be here for a long time."

Up next for Henderson, most likely, is a shot at the Strikeforce light heavyweight title.