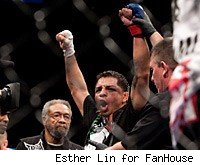 We put a bow on the 12th season of The Ultimate Fighter on Saturday night with the Ultimate Fighter Finale, which features a couple of good-looking young fighters vying for the Season 12 title, and a star from the show's first season in the main event.

What: The Ultimate Fighter: Team GSP vs. Team Koscheck Finale

Stephan Bonnar vs. Igor Pokrajac
Bonnar will always have a place in the UFC because of his role in the first Ultimate Fighter Finale, when his brawl with Forrest Griffin gave the UFC a huge shot in the arm at a time when the company was in danger of going out of business. The truth is, Bonnar really isn't good enough to be headlining UFC fight cards in 2010, but in Pokrajac the UFC has given Bonnar a very beatable opponent. I like Bonnar to win by TKO.
Pick: Bonnar

Michael Johnson vs. Jonathan Brookins
Judging them solely on their Ultimate Fighter bouts, you'd have to say Brookins has been more impressive this season, with a couple of impressive first-round submission wins in the early rounds and a dominant decision in the semifinals. But in the final I think Johnson will use his superior size, superior strength and superior wrestling technique to take Brookins down, control him on the ground, win a decision and earn the UFC contract that goes with winning a season of the reality show.

I should add, however, that I think Brookins also has a bright future ahead of him in the UFC -- maybe even a brighter future than Johnson, as I see Brookins being more competitive if he moves down to featherweight, where he has fought in the past. Overall, I think this season of The Ultimate Fighter offered a higher caliber of competition in the cage than the last few seasons have had, and I expect Johnson and Brookins to have strong UFC careers, and a few other guys from this season to make their marks in the UFC as well.
Pick: Johnson

Demian Maia vs. Kendall Grove
The lanky Grove won Season 3 of The Ultimate Fighter, and after winning his first couple UFC fights after that, it was easy to get excited about what he could accomplish in MMA. But since then Grove has failed to fulfill his promise, and it's tough to pick him against a Top 10 middleweight like Maia. There's always a chance that Grove could use his superior height and reach, stay on the outside, and beat Maia standing, but the much more likely result is that Maia gets Grove down and submits him.
Pick: Maia

Johny Hendricks vs. Rick Story
The 27-year-old Hendricks started his MMA career three years ago as a promising prospect with two NCAA wrestling titles to his credit. So far in his career, he's delivered: He's 9-0 overall, 4-0 in the UFC, and always puts on a show. Story is on a four-fight winning streak of his own and is also known for giving the fans their money's worth, but I like Hendricks to put Story on his back repeatedly and win a convincing decision.
Pick: Hendricks

Nam Phan vs. Leonard Garcia
The UFC announced this week that it will match Phan, who lost to Johnson by split decision in the final fight of this season's reality show, against Garcia, who's now returning to the UFC as part of the merger with the WEC. It should be an entertaining fight that gets the UFC's featherweight division off to an exciting start, and I'll pick Garcia to do what he so often does, which is throw a lot of wild punches and win a close decision.
Pick: Garcia