UFC Expected to Announce Return to Brazil Later This Month 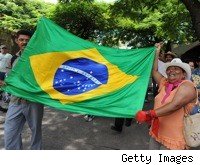 The UFC's return to Brazil is close to becoming a reality.

MMA Fighting has learned from sources close to the situation that the organization is planning on holding a press conference later this month in Brazil to announce that they will be putting on an event in the South American country in 2011.

Last month, GracieMag.com reported that the UFC was planning on holding an event at the HSBC Arena in Barra da Tijuca, Rio De Janiero, in November 2011.

This event would mark the UFC's first in Brazil since Ultimate Brazil in October 1998 and only the second in the organization's 17-year history.

This event would also be the first one in Brazil since Zuffa purchased the organization from Semaphore Entertainment Group in 2001.