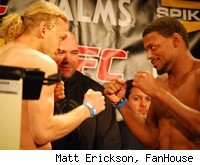 LAS VEGAS – All but one fighter made weight on their first attempts for "The Ultimate Fighter" Season 12 Finale on Friday.

The weigh-ins took place at The Palms Casino Resort in Las Vegas, site of Saturday's card, which airs live on Spike starting at 9 p.m. Eastern.

Michael Johnson and Jonathan Brookins will fight for "The Ultimate Fighter" Season 12 lightweight title in the main event, with the winner getting a guaranteed UFC contract. Johnson weighed 156; Brookins came in a pound under at 154. Johnson reached the finals by virtue of a split decision win over Nam Phan in a semifinal bout that aired on the reality series Wednesday; Brookins won a unanimous decision over Kyle Watson to get to the championship bout. Johnson and Brookins were teammates on coach Georges St-Pierre's team.

Brookins has experience at both featherweight and lightweight, including a third-round TKO loss in the WEC to current featherweight champion Jose Aldo in Aldo's second WEC fight. The Gracie Barra-trained Florida-based fighter also has a Bellator win on his resume.

Johnson, one of the favorites heading into Season 12, recently became the head MMA coach at the Gracie Barra Springfield (Mo.) Fight Club. He twice tried out for "The Ultimate Fighter" before finally getting his shot this season. To prep for Brookins, Johnson said Thursday he spent several weeks training at the renowned Greg Jackson camp in Albuquerque, N.M. Jackson was one of the assistants St-Pierre brought in to work with his team on the show.

Looking for his second straight win after a three-fight losing skid, fan favorite Stephan Bonnar, whose signature fight with Forrest Griffin on the first season finale of "The Ultimate Fighter" was a landmark moment for the UFC and mixed martial arts, weighed in at 205 for his fight against Croatian Igor Pokrajac. Pokrajac also was on the button at 205.

And in what could prove to be an important fight in the UFC's middleweight division, Season 3 TUF winner Kendall Grove comes in a 5-to-1 underdog against Demian Maia, who fights for the second time since losing a unanimous decision to champion Anderson Silva in a title fight at UFC 112. Each of them weighed in at 186.

The TUF 12 Finale also ushers in the first lighter-weight fights in the UFC's history. The Zuffa-owned UFC and WEC announced a merger of the two promotions in late October. On Saturday, Fredson Paixao and Pablo Garza go into the record books as the UFC's first featherweight fight. Nick Pace and Will Campuzano then fight in the first bantamweight bout for the UFC. And Ian Loveland-Tyler Toner and Leonard Garcia-Nam Phan also have featherweight bouts.

Of the 22 fighters on the card, only Pace failed to make weight, coming in at 138 pounds in his first attempt for his bout against Will Campuzano. Pace chose to forfeit 20 percent of his fight purse, according to a UFC official. Ten percent of that will go to Campuzano; the other 10 percent goes to the Nevada State Athletic Commission.

The TUF 12 Finale features seven of the eight quarterfinalists from the show: Johnson-Brookins, Phan, Aaron Wilkinson-Cody McKenzie and Watson-Sako Chivitchian. Alex Caceres is the only quarterfinalist absent from the card, reportedly due to an injury that kept him from being ready for a fight.

The TUF 12 Finale takes place at The Pearl at The Palms in Las Vegas. The main card will air live on Spike at 9 p.m. Eastern on Saturday.