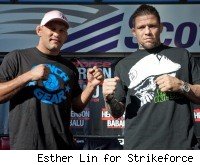 The legacies of Dan Henderson and Renato "Babalu" Sobral are practically written. The former won championships in two divisions in PRIDE, while the latter captured Strikeforce's light-heavyweight championship. At 40 and 35 years old, respectively, it's safe to assume most of their careers are behind them.

With time no longer an ally to either man, it seems more critical to capture the opportunities that come. And Saturday's Strikeforce matchup may be a golden one; company CEO Scott Coker has said it's likely the winner would earn an opportunity against reigning 205-pound champ Rafael "Feijao" Cavalcante.

Henderson (25-8) is coming off a five-round decision loss to then-middleweight champ Jake Shields, just before Shields defected to the UFC. Instead of sticking around at 185, Henderson opted to move up a class, where weight-cutting is no issue, and chase their belt. Because of his name value and history of success, apparently it's only going to take one win to leapfrog everyone else in the division.

At this stage of his career, Henderson's pretty much seen it all. He's been locked in combat with ground wizards like Antonio Rodrigo Nogueira, strikers like Wanderlei Silva, and balanced hybrids like Rich Franklin.

Sobral (36-8) has likewise experienced a little bit of everything. He started off his career as a grappler, but has progressed to the point where he can be considered a fully rounded fighter. The duo who fought each other back in 2000, with Henderson winning a decision, are barely recognizable from what they were then.

The biggest difference between the pair today is the power Henderson wields. While only 11 of his 25 wins come via knockout, Henderson has consistently shown the ability to drop or hurt his opponents, particularly with a bombing overhand right thrown with maximum power. The only downside to it is that at times, Henderson can get overly reliant on the weapon.

Still, according to a Compustrike analysis of Henderson and Sobral's recent fights, Henderson outlands Sobral in arm strikes, 33 percent to 26 percent.

Sobral, meanwhile, has only five KO or TKO wins in his distinguished career, and incredibly, he has only one in his last 34 fights (and even that stoppage, against Bobby Southworth, came via cut).

Largely because of Henderson's power, he's considered the overwhelming favorite Saturday night, but remember, you only have to go back one fight to a time when Sobral beat a power puncher. At Strikeforce: Los Angeles, he earned a unanimous decision over Robbie Lawler in a fight that spent just 26 seconds on the mat.

Sobral did this largely on the strength of volume, outlanding Lawler in overall strikes despite the fact that Lawler landed at a much higher percentage.

Henderson has to be careful of falling into the same trap. Part of the reason Sobral was able to outwork Lawler was probably because Lawler was on the lookout for takedowns. Lawler does not have the wrestling pedigree that Henderson has, so stopping the takedown shouldn't spill over into affecting other parts of Henderson's game as it did for Lawler.

However, if Sobral does look to take the fight down -- a good possibility considering 18 of his wins are by submission -- Henderson's proven to be a bit more succeptible to it than most would think.

In his last six fights, Henderson's opponents have been successful on nine of 20 takedown tries (45 percent), a number partially skewed by his last fight, during which Shields put him to the mat on five of nine attempts. One caveat: Henderson hasn't spoken much about it, but he was bothered by a back issue in the Shields fight which hampered him.

Still, there is potential for Babalu to take him down; he's just going to have to wade into the danger zone of Henderson's right hand to get there.

Henderson's plan is no secret (swing heavy, swing often), so much will depend on whether Sobral goes along for the ride like he did with Lawler, or copies Shields' strategy of taking the fight down at all costs.

In the end though, Sobral is unlikely to chase takedowns the way Shields did, and this fight will probably settle into a mostly standup affair. It will come down to Sobral having to out-land Henderson while staying away from his bombs, but Henderson seems to clip everyone. As a general rule, judges tend to favor cleanly landed power shots to volume unless the numbers are so overwhelming they can't be ignored. Because of that, edge: Henderson.

The 40-year-old former PRIDE champ takes it 29-28 and moves on for a chance to add a shiny new belt to his collection.