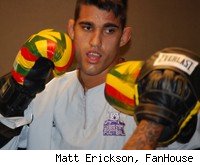 LAS VEGAS – Kendall Grove has never lost on Spike TV. Remind the UFC middleweight of that, and he has just one thing to say: "Shhhhhh!"

Those Hawaiian islanders have always been a bit superstitious. Just ask the Bradys. But Grove said he's not – just maybe cautiously optimistic. "Tell me that after I win," he said Thursday at The Palms in Las Vegas, site of his Saturday fight against former top middleweight challenger Demian Maia.

Grove, the Season 3 winner of "The Ultimate Fighter," said he loves to bring it when he fights on Spike. Despite a little flap with the network earlier this year over comments he made about Spike treating fighters in the TUF house as "cattle and sheep," Grove told MMA Fighting he's a little nostalgic this week – and not just because he's remembering getting his hand raised on Season 3.

"('The Ultimate Fighter' is) what got me here," Grove said. "But the last time I fought on an 'Ultimate Fighter' finale, I fought the late Evan Tanner, rest his soul. And that was one of my most memorable fights because he was a former champ and that was my biggest accomplishment thus far in my career. It just brings back good memories of a great icon of the sport, and also of myself going in there and shocking the critics."

True, Grove (12-7, 1 NC, 7-4 UFC) has had some critics since he burst onto the UFC landscape four years ago. But he might judge himself the harshest.

His UFC career has been up and down – he hasn't put together a streak longer than three wins since he started 3-0 in the promotion. He won a split decision against Goran Reljic at UFC 116 in July. But he'll enter his fight with Maia (13-2, 7-2 UFC), one of the most accomplished Brazilian jiu-jitsu players in the game, as a 5-to-1 underdog.

Grove seems to have reached a put-up-or-shut-up moment in his career, and he knows it. Coupled with a newfound joy of living and training back home in Hawaii, and soon to be married with a baby on the way, he wants to just enjoy his job and let the chips fall where they may. But to put it bluntly, as he said, "My back's against the wall."

"I always bring an exciting fight in victory and defeat," Grove said. "I'm not having the most consistent career, but I like to fight. I'm not afraid to fight anybody. I hit a point where I want to start becoming known as a Top 10 fighter, and in order to do that I've got to beat some of those guys in the rankings. I asked Joe Silva for this fight. I said I wouldn't mind fighting Maia, testing my ground and just seeing where I'm at. He made Anderson (Silva) fight a cautious fight, and usually Anderson runs through guys. So it's a big, big test for me – this is going to be my toughest fight thus far and I'm just excited. Whatever happens, happens."

There was a point not long ago when Grove wouldn't have been so calm about such things. He said he knows any loss in the UFC could be his last. But after spending time training in Las Vegas, and with his TUF 3 coach Tito Ortiz in California, Grove said his return to his Maui home, where he has run his own training center the last couple years in his hometown of Wailuku, is what is helping keep him more grounded now than ever.

Being away from home – and, well, a couple first-round knockout losses to Patrick Cote and Jorge Rivera in 2007 – helped give him his growing-pain bumps in the road that he believes will help him respond in a situation like his Maia test on Saturday.

"(Las Vegas) is ruthless – they don't call it Sin City for nothing," Grove said. "I had my fun – I got my Vegas out of me. I'm a local boy. I come from the islands and I like that pace. I think I would be dead or I wouldn't be in the UFC anymore if I had stayed here, God's honest truth. Going back home saved my career – it saved my mind ... I'm a new guy. I'm fighting because I love to fight. I'm a human being, and if I get clipped in the jaw or I do something stupid on the ground I could get caught. Cote and Rivera showed that. That's what saved me. That's what made me realize the purity of the sport."

Against Maia, whom he'll have a six-inch height advantage over, he gets nothing short of a grappling legend. But Maia, too, has been up and down the last two years. Just when he was about to become a top middleweight contender, Nate Marquardt put his lights out in 21 seconds at UFC 102. He got a title shot against Anderson Silva at UFC 112, but was toyed with for five rounds.

The assumption, given his jiu-jitsu credentials, is that Maia will want the fight on the ground, hoping to submit Grove – who is no slouch on the ground, himself. But Grove said he has prepared himself for a well-rounded opponent.

"I don't look at anybody in this sport as one-dimensional, especially Demian," Grove said. "He's come full circle. He's trained with a lot of good standup guys – Shogun (Rua), Wanderlei (Silva). His forte is jiu-jitsu, and I expect him to try and use that – (but) I expect him to come out punching. I'm just prepared for any situation – at least i think I am. We're going to find out. I'm going to try to keep it standing. If it goes to the ground, we'll see what happens.

"I want to take that challenge."

Grove and Maia fight on the main card of "The Ultimate Fighter" Season 12 Finale on Saturday at The Pearl at The Palms in Las Vegas. The main card airs live on Spike at 9 p.m. Eastern.