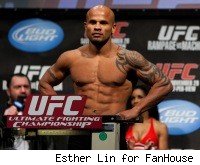 UFC rookie middleweight Maiquel Falcao was arrested in Pelotas, Rio Grande do Sul, Brazil, according to a report from Diario Popular, a Brazilian news site.

Falcao was reportedly taken into custody on the property of Brazil South Communications Group, shortly after conducted an interview. The arrest was on a warrant related to the bodily injury of a woman stemming from an incident 2002.

The Brazilian recently won his octagon debut in a somewhat lackluster three-round unanimous decision over Gerald Harris at UFC 123.

The report added that Falcao was taken to an "emergency department" in Pelotas and was referred to a jail, but was awaiting a decision of whether he would actually be sent to the jail because it was scheduled to be closed. His lawyer has filed an appeal.

No other details of his alleged offense have yet to emerge.

Falcao, whose given name is Maiquel Jose Falcao Goncalves, is 26-3 in his career, and has won eight straight fights overall. He is a product of the famed Chute Box team, and came into the UFC with the reputation of a powerful, sometimes wild striker. He showed flashes of that against Harris, but exhibited long stretches of restraint in outpointing the American over three rounds.