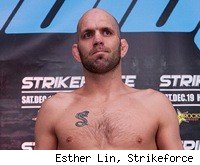 On Saturday night 40-year-old Matt Lindland takes on Robbie Lawler at Strikeforce: Henderson vs. Babalu in St. Louis. It's a fight Lindland admits that he needs to win in order to keep his career moving in the right direction, and it's also one that he intends to turn into, as he puts it, "a gritty, messy fight." But before he finds out what his future holds, Lindland sits down with us to talk about his past, including his very first taste of MMA.

He has no problem admitting it now: back then, Matt Lindland had no idea how to even begin to prepare for an MMA fight. Then a 26-year-old wrestling coach at the University of Nebraska and an aspiring Olympic team member, all Lindland knew was that other Greco-Roman wrestlers had done it and it looked like a fun way to make a couple dollars.

One day he ran into Royce Alger, a well-known wrestler for the University of Iowa who was dabbling in MMA and was said to be headed to the UFC soon. Lindland told him he'd been thinking about taking the same path, and wanted to know how to get started.

"He was like 'Oh, you can't do this. You wouldn't be any good at it,'" Lindland recalls now. "I kind of said, 'Okay, but I think I want to give it a shot.' You know, thanks for the non-advice. But then he just kept going on and on about how Greco guys couldn't do this. I was just looking at him like, are you drunk or something? It was just this weird conversation. Finally I told him, 'I would fight you right here, right now.' He said, 'I only fight for money.' So I pulled out my billfold and I went in there and laid it all down on the counter. He just kind of laughed and walked away."

By that point Lindland had his mind made up and nothing was going to change it. In February of 1997 he got his first chance when he signed with the World Fighting Federation to compete in a sprawling 32-man tournament that would take place over the course of many events.

"It was an open-weight tournament, and I had no idea who I'd be fighting," says Lindland. "There were guys like Gary Goodridge, "Big Cat" Tom Erickson was in that tournament, "The Ghetto Man" Joe Charles, a lot of guys. It takes me back a few years just to talk about them."

His first draw came on February 14, when he was slated to take on an Armenian fighter named Karo Davtyan in Birmingham, Alabama. Since he had no idea how to train for an MMA fight, Lindland prepared by signing up for a wrestling tournament as a heavyweight so he could get used to dealing with bigger guys.

That's it. No submissions training. No striking.

"I figured boxing was just punching people," he says. "I'd punched people before."

The arena was "huge," according to Lindland, packed with upwards of 7,000 people, which was quite a turnout in the late '90's. But he wasn't the least bit nervous, he says. Only excited, and perhaps a bit too eager.

"I was so excited to get in there and compete that I ran across the ring and almost got my head kicked off. I finally took the guy down and kind of pounded him into a wrestling stoppage," Lindland says. "On the way back to the center of the mat to do the old hand raise thing in the middle, the guy was complaining that the fight shouldn't have been stopped. So I told him to go back to his corner and we'd start over."

And that's how, just like fellow MMA veteran Dennis Hallman, Lindland ended up fighting the same person twice in his MMA debut. Rather than listen to his opponent's grumbling, he offered to give him a second chance. And why not?

"There was no commission to tell us we couldn't do that in Birmingham, Alabama in 1997," Lindland says. "The referee and his corner and my corner were all very confused as to what was going on. I went back to my corner to start over and they were like, 'What are we doing?' I said, 'I told him I'd fight him again.' So we fought again."

Lindland won that one too, only via a more decisive TKO stoppage this time. There was no more complaining from Davtyan. Lindland, having now had a taste of mixed martial arts, was officially hooked.

His only thought after the fight was, as he puts it, "when can I do this again?"

"I did two more fights in '97 and then I realized that I would actually have to learn some skills if I wanted to do this," he says.

Though Lindland went on to realize his Olympic dreams at the 2000 games, winning a silver medal for the U.S. team, he still managed to break into the UFC before the year was out and had two more UFC bouts the following year.

As for the World Fighting Federation, the organization that had inked Lindland and other early MMA luminaries for it's ambitious open-weight tournament?

"They folded," he says. "The contract wasn't as good as the paper it was written on."