Greg Jackson, Dana White and the Power of Perception Over Reality 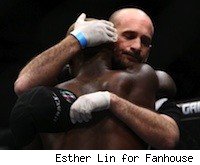 There are a few things that most people think they're very good at, regardless of whether they really are. Driving is one of those things. So is sex. Less titillating, but still important, is calculating probability.

Take the phenomenon known as confirmation bias, for instance. Simply put, it states that people are more likely to put undue weight on information that supports their existing beliefs than on information that refutes them. This seems especially relevant in light of the recent dust-up between MMA trainer Greg Jackson and UFC president Dana White, as well as the ensuing comment storm over it on the internet.

According to White, Jackson encourages a boring, overly conservative approach in his fighters, and this is a consistent pattern. According to Jackson, the fact that his fighters have taken home 12 bonus awards in 22 events in 2010 (and for the record, when Jackson said 'half your bonuses went to my guys,' we can assume that what he meant is they won a bonus half the time, not half of all bonuses handed out – he's too smart to be that bad at math) proves that White's assessment is completely unfounded.

So who's right? As far as I can tell, your answer depends on what you think of the issue before you ever hear the evidence.

First, take Jackson's claim. 12 bonuses in 22 events, that's a verifiable fact. We can go down the list and discover that he's telling the truth, but does it prove anything?

For example, one of the bonuses that Jackson counts in his tally is a Submission of the Night nod to Ryan Jensen, who pulled off a guillotine choke finish of Jesse Forbes at UFC 114. I was at that event and I remember that fight from the prelims. It was a good submission in a brief, but exciting fight. It was also the only submission on that fight card, so the award wasn't necessarily a referendum on Jensen's entire team.

Then again, there are instances when bonuses are something of a political decision.

Anybody remember UFC 115, when Mirko "Cro Cop" Filipovic got the Submission of the Night for a rear naked choke of Pat Barry that was so sloppy it would have made a jiu-jitsu instructor unleash a stream of Portuguese obscenities? That choke was nowhere near as technically sound or as impressive as Mike Pyle's triangle choke from the prelims. But hey, it's Cro Cop and he asked nicely, so he got it.

My point is, bonus numbers only tell part of the story, but it doesn't really matter since it's the part of the story that White and other Jackson camp detractors aren't interested in anyway.

When White said it was a consistent pattern with those guys, he didn't mean mathematically, statistically consistent. What he really meant to say was, 'This crap happens all the time.'

We all do this. I do it with the gas station where I buy my coffee each morning (classy, I know). Whenever they're out of my favorite -- the Caffeine Alert!! -- it feels like they're always out. Of course, they aren't. If they were I never would have been able to develop an unhealthy addiction to it in the first place, but that's not the point. The point is, once it's in my head that this crap happens all the time, I'm only going to take notice when my narrative is reinforced.

When people denigrate the Jackson camp, they aren't talking about the statistical average of all the guys who fight under the Jackson banner. They're not talking about Kyle Noke's two finishes or Ryan Jensen's choke or even Jon Jones' one-sided destructions. They're talking about a vague feeling, a perception.

In the list he sent out detailing his team's exploits over the past year, Greg Jackson mentioned 20 different fighters that he's trained. That list included some guys who have played it more conservatively lately, like Nate Marquardt and Rashad Evans. It also included guys who have done anything but, like Shane Carwin and Donald Cerrone.

There's no way you could look at such a broad array of fighters and come to one single conclusion about them that holds up consistently across the board. Within that group there are guys at so many different career stages, and with so many different motivations and styles, it's impossible to classify them under one heading.

For instance, Georges St. Pierre, a champion with superb wrestling skills and the ability to avoid risky striking exchanges whenever he feels like it, simply doesn't have many reasons to plant his feet and throw bombs with an opponent. On the flip side, Leonard Garcia, who has a 2-3-1 record in his last six fights, depends on the excitement factor of sheer brawlability to maintain his job, so a loss in a shootout is preferable over a win in a slow grind any day.

If we try to force those two into the same category, all we're doing is ignoring facts in favor of a world that more comfortably fits with our pre-existing judgments -- judgments that become easier to maintain when we seize upon instances that confirm them and ignore everything else.