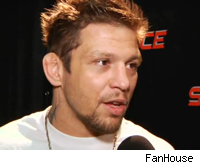 Are you someone who has a tough time making decisions? Does holiday time make you crazy because you can't decide on the right thing? (Just go with a gift card, dummy). Fortunately for you, you're not often faced with decisions in the MMA world. On most nights there's a major show running, it's the only major show running.

Unfortunately for you, Saturday night is not one of those nights. You're going to have to make a decision. Strikeforce: Henderson vs. Babalu airs on Showtime, while the UFC counters with the TUF 12 Finale on Spike.

What to do? To figure it out, I enlisted the help of my MMA Fighting colleague Ben Fowlkes to argue over who's controlling the remote.

What's the best or most significant match from the two events?

Fowlkes: I hate to start this off by being a jerk about the questions (kidding, I love it), but ... best or most significant? Those are really two different questions, aren't they? As far as having the most immediate significance in the sport, it's got to be Dan Henderson vs. "Babalu" Sobral. They're the two most important, most accomplished fighters in action this weekend, and their fight actually has clear, immediate implications.

But since the term 'best' is so subjective when applied to things like MMA fights, I'm going to go ahead and interpret it to mean 'fight you most want to see.' That's easy: Scott Smith vs. Paul Daley. For one thing, I never tire of Smith's take-seven-to-land-one style of fighting. For another, I can't see how this doesn't end with somebody getting their head knocked off their shoulders. Does that make me a sicko for wanting to see it so badly? Maybe. But I'm fine with that.

Chiappetta: Yeah, so I asked two questions. That intro about having a rough time making decisions? It sort of applies to me (but the gift card advice is still solid).

While there are some entertaining matches, there aren't many that are significant in the grand scheme of things. Interestingly, the match that might have the most long-term importance is the UFC welterweight match pitting Johny Hendricks vs. Rick Story. Hendricks is undefeated at 9-0, including 4-0 in the UFC while Story hasn't lost since his UFC debut, and also has a four-fight UFC win streak. While they're both still a bit under the radar, there's no question that the fight is a major stepping stone as they try to navigate their way into the title chase.

I'll grant you that Henderson-Sobral has more star power and more immediate title implications, but at 40 and 35 years old, respectively, their legacies are practically written.

Fowlkes: One could argue that the combatants in the TUF 12 finale fight have the most to gain, but I won't do that. Sure, the winner gets a cut-glass trophy and a kind of, sort of lucrative UFC contract, but we only need to look at the cautionary tale of Efrain Escudero to know it's not the lottery ticket the UFC makes it out to be.

Instead, I say Dan Henderson has the most to gain. If he goes out there and puts a beating on Sobral, fans will be more likely to accept that the Jake Shields fight was just a bad night for him and suddenly -- boom! -- he's right back up there.

Most to lose? That's got to be Paul Daley. He's been fairly unimpressive in his two post-UFC wins, and now he's getting his first shot in a big show since his banishment from the Octagon. If he gets knocked out by Smith he immediately starts to look like damaged goods, not to mention a bad investment.

Chiappetta: A contract comes and goes but that sweet trophy lasts a lifetime. That said, who has the most to gain Saturday night? Igor Pokrajac. Why? Because nobody knows who he is and he's facing Stephan Bonnar, a very well known fighter. Even if he wins this fight but washes out in the UFC, that win will probably be worth money to him over the life of his career in smaller promotions, where they can promote him as a guy who beat longtime UFC star Stephan Bonnar. A win would be huge for him. Meanwhile, win or lose, Hendo is still going to walk around being Hendo. Like I said, his legacy is basically written.

Most to lose? I'm going to go with Robbie Lawler, who while always an exciting fighter, is just 1-2 under the Strikeforce banner. Though he's still only 28 years old and has good days ahead, losing three out of four, including to the 40-year-old Matt Lindland, is going to put further doubt in the minds of many that Lawler will ever reach elite status.

Which guaranteed style clash will result in the better fight: Maia vs. Grove or Lindland v. Lawler?

Fowlkes: There you go again with those terms. Which is the 'better' fight? I guess it depends on if you favor dirty boxing or slick jiu-jitsu. But okay, I'll bite. For my money, Lawler-Lindland is the more intriguing clash of styles. Lindland knows that he can't stand there and trade bombs with Lawler, so he has to turn this into one of those ugly, messy fights where he's constantly in the other guy's face, bullying him up against the cage and generally acting like a pitiless older brother.

And honestly? I love watching that Lindland. I can fully understand how other people wouldn't enjoy it, but to me that's quality entertainment. Maia and Grove? I look at that and all I see is a fight that Maia should win ten times out of ten. Give me the hard-charging old-timers like Lawler and Lindland any day.

Chiappetta: Lindland didn't look great in his last match with Kevin Casey, but he did close with a third-round TKO, ending his two-fight losing streak. As I stated before, I think Lawler has the most to lose this weekend, and when you're a 40-year-old pro athlete like Lindland is, you're always trying to prove to people that you're not yet over the hill. Because of that, I think the struggle between these two to emerge with the win should be riveting. So while it pains me to say it, I agree with Fowlkes. It is the holidays after all, and if there's one better present than gift cards, it's peace.