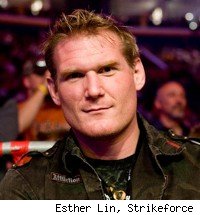 Former UFC heavyweight champ Josh Barnett told the California State Athletic Commission on Thursday that he was there not to appeal his positive steroid test from June of 2009, but rather to speak with the commission and apply for a new license.

Sounds simple enough in theory. In practice, however, it turned out to be anything but, with the end result being yet another continuance in Barnett's lengthy licensing saga in the Golden State.

After allowing Barnett to launch into a nearly four-minute explanation of the chain of events that led to him to test positive for the anabolic steroid Drostanolone while applying for a license renewal in the summer of 2009, the commission began to realize that Barnett was still intent on maintaining his innocence on that charge – and here's where things got tricky.

This led to some confusion on the part of the CSAC as to whether Barnett should be sworn in before continuing to offer what might be construed as testimony, and then to still more confusion as to whether senior assistant attorney general Alfredo Terrazas should go first in presenting the case against Barnett.

"Generally the process that has been used is that the attorney general's office presents some sort of summary of the case," said Anita Scuri, a lawyer for the Department of Consumer Affairs, who explained that Terrazas would go first, followed by a rebuttal from Barnett, followed by questions from the commission.

Only that didn't happen either.

Barnett explained that he did not bring any legal counsel with him to the hearing because he was asked to appear and provide a new sample for testing, but never told to prepare for a full hearing. Barnett hadn't come to appeal the positive test, he said, and yet he also didn't appear prepared to admit to any wrongdoing.

"The rule says that if someone is petitioning for reinstatement, they do have to show rehabilitation," Scuri said. "I'm sure Mr. Terrazas can tell you what that includes."

Again, that didn't happen. After suggesting that it may "jeopardize [Barnett's] potential of successfully reinstating his license" to have him testify under oath without the aid of legal counsel, the commission offered Barnett the choice of coming before the commission at a later date with counsel present.

"Rehabilitation is an essential component of it," explained Scuri. "You didn't appeal, therefore we're not going to re-litigate what happened."

Barnett, who explained that he had not come prepared with counsel to present evidence of rehabilitation, then asked for a continuance, which the commission granted. But as far as what is meant by rehabilitation in this case, that definition remained somewhat murky.

"You keep using the word rehabilitation," said Barnett. "I understand the definition..."

"This is something for you to discuss with your counsel," Scuri interrupted. "It's not the purview of the commissioners at this point to tell you what you need to do to show rehabilitation."

"I only ask simply because I'm trying to understand what your definition of rehabilitation is. I don't think my counsel would know that or I would know that."

"Mr. Terrazas might be able to help you out afterwards," replied Scuri.

Before wrapping up, CSAC executive officer George Dodd indicated that he had met with Barnett before the hearing to explain what would be asked of him, but hadn't specifically told him that he would need to bring legal counsel.

With his day in court now deferred for a fifth time, Barnett left the CSAC hearing and took almost immediately to his Twitter to voice his frustration.

"Wow. I show up only to re apply and get ambushed by an assistant AG who has put together a case against me. Sweet," Barnett wrote. "As if I would show up without my legal representation if I knew that was going to be the case!"