Chael Sonnen Gets Off Easy With California Commission 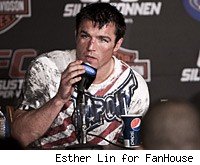 For most of a bumbling, badly run meeting before the California State Athletic Commission, Chael Sonnen looked like he was toast. Yes, he had brought a couple of highly regarded lawyers with him, and yes, he had a doctor who testified that he had prescribed Sonnen with testosterone to deal with hypogonadism. But rules are rules, and the members of the Commission, despite seeming at times like they didn't know what their own rules were, appeared to be in general agreement that Sonnen had violated their rules by failing to properly disclose he was taking testosterone.

And then, in a surprising vote at the end of the Commission hearing, Sonnen got off easy: After the Commission members first deadlocked 2-2 when voting on whether to uphold Sonnen's one-year suspension, they voted again on a measure to cut his suspension in half, to six months, and that measure passed, 3-1.

Call it a split decision victory for Sonnen, a Fight of the Night-quality performance by his lawyers, and a big loss for the California State Athletic Commission -- and for everyone who wants the rules on performance-enhancing drugs to be upheld fairly and uniformly.

In MMA, or any other sport, we're accustomed to watching an event and walking away from it being able to identify clear-cut winners and losers. In this case, Sonnen has to be considered a winner because he'll be eligible to fight again as soon as March 2. (His suspension began on Sept. 2.)

The UFC currently has one event tentatively scheduled for March, UFC 128 in Abu Dhabi on March 19, so that could be the venue for Sonnen's return. However, for the purpose of appearances, it would be a lot better for the UFC to make Sonnen return in a state with a strong athletic commission that will handle the drug testing procedures. The UFC handles its own drug testing for overseas shows, and it wouldn't look good to have Sonnen return without having to go through a state-sanctioned drug test.

Then again, from the looks of Thursday's California Commission hearing, there may not be any states with strong athletic commissions: California's commission is supposed to be one of the better ones, but on Thursday the Commission members looked unprepared and unable to run their own hearing. In addition to seeming only vaguely aware of what their rules are, Commission members referred to Sonnen as a boxer rather than a mixed martial artist and revealed at various points that they didn't know who UFC President Dana White and Nevada State Athletic Commission Executive Director Keith Kizer were.

Sonnen publicly acknowledged for the first time at the hearing that he regularly injects himself with testosterone as part of a hormone replacement therapy. But he was never able to offer a clear explanation of why he didn't properly disclose that fact to the California Commission. At one point he offered a strange claim that he didn't want to admit he suffered from hypogonadism, saying that such an admission would have forced him to relive painful teasing from his youth about not going through puberty.

Sonnen also came across as unprepared and showed nothing of the confidence he so often displayed in the run-up to his fight with Anderson Silva at UFC 117. As he answered one question, Sonnen was admonished to speak more respectfully, which had to amuse all of the UFC fans watching the live broadcast of the hearing on the web, as anyone who follows the UFC has seen Sonnen act a whole lot more disrespectful than he acted in the meeting room on Thursday.

Overall, Sonnen seemed as though he thought all he had to prove was that a doctor told him it was OK for him to use testosterone, when what the Commission wanted to know was why he didn't disclose his testosterone use on his pre-fight questionnaire.

And yet that compromise vote at the end of the meeting came out of nowhere -- it was reminiscent of that UFC 117 fight itself, only this time the Commission was playing the part of Sonnen, dominating the proceedings throughout, and Sonnen played the part of Silva, emerging victorious at the end with a shocking conclusion.

If nothing else, give credit to Sonnen for hiring attorneys Howard Jacobs and Steven Thompson, both of whom have worked on many similar cases in the past and know the ins and outs of drug test appeals. Contrast that with Josh Barnett, who spoke at the hearing just before Sonnen, and who failed in his attempt to get re-licensed.

Barnett asked for and was granted a continuance until the Commission's next meeting, on Feb. 2, before he even states his case for why he deserves a license. Sonnen brought with him two well-respected lawyers with a track record of defending athletes in performance-enhancing drug cases, but Barnett confessed that he didn't bring his lawyer with him because he didn't realize he was actually going to have to answer questions under oath.

"I guess I'll have to wait for counsel," Barnett said. "I had no idea."

This is far from Barnett's first rodeo; it's now been close to a year and a half since he tested positive when trying to get his license to fight Fedor Emelianenko on the Affliction Trilogy card, and he was suspended and stripped of the UFC heavyweight title for a positive steroid test in 2002. How many times does he have to get in trouble with performance-enhancing drugs before he realizes it's serious business?

And how long will it be until the California Commission finally gets some clearly defined, fairly enforced rules on performance-enhancing drugs? Events like the ones that transpired Thursday create a perception that you can cheat and get away with a slap on the wrist, as long as you've got a couple of fancy lawyers.