Buakaw Por. Pramuk, Kazunori Yokota and Others Added to Soul of Fight 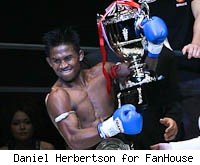 Sengoku Raiden Championship promoter World Victory Road announced six fights on Thursday for its end of year "Soul Of Fight" event to be held at the Ariake Colosseum in Tokyo on December 30th.

Also announced were kickboxing bouts, muay thai bouts and "jacket" matches (which are likely to be essentially combat sambo bouts) featuring the likes of Flyweight King Of Pancrase Kiyotaka Shimizu, WBC Muay Thai Bantamweight Champion Arashi Fujiwara and New Japan Kickboxing Flyweight Champion Mutsuki Ebata.
Buakaw sat out this year's K-1 World MAX tournament as FEG officials requested that the two-time champ move down to their 63kg division, something that did not sit well with the Thai. His debut in this years Shoot Boxing S-Cup was a successful one as he dominated all of his opponents and looked at home in the ring under a rule-set that allows throws and clinching.

Hiroki Nakajima arrived on the K-1 scene in 2010 and was expected to make waves based on the strength of his 2009 Krush tournament win and got off to a good start in the Japan GP, claiming two clean knockouts with his hands but ran into a a highly motivated Yuichiro "Jienotsu" Nagashima in the finals where Nakajima himself was knocked out. Albert Kraus in July proved to be a test too great for the young Nakajima and based off that performance, one would think that Buakaw should also be too much for the puncher.

That this fight is being contested under kickboxing rules similar to those of K-1 is disappointing considering how badly the rules cripple the Muay Thai of Buakaw.

Akihiro Gono was considered a lock going into his lightweight debut against the relatively inexperienced Jadamba Narantungalag but the UFC and Pride veteran dropped a comprehensive decision to the Mongolian . Yokota has spent most of 2010 sidelined with an injury that was a result of a car crash in late 2009 and his return to the ring was spoiled in October by Brian Cobb who came in heavy but managed to win a tough fought split decision.

SRC Featherweight Champion Marlon Sandro recently posted on his Facebook page that he has been booked for an end of year title defence but has not revealed his opponent. It is obvious that the fight to make within the promotion is against Shooto Champion Hatsu Hioki. Sandro's opponent, along with 14 other bouts are planned to be announced some time next week.