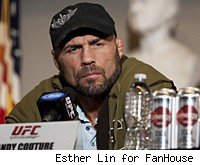 LAS VEGAS – MMA Fighting will have World MMA Awards 2010 winners and results live tonight from The Pearl at The Palms Casino Resort.

At the 2010 awards, MMA Fighting is nominated for Best Media Source, and MMA Fighting's Ariel Helwani is up for MMA Journalist of the Year.

This year's show is being hosted by UFC Hall of Famer Randy Couture with co-host Molly Qerim from the Versus network. The awards will stream live at Versus.com starting at 10:30 p.m. Eastern on Wednesday. An edited one-hour highlights version of the show will air on Versus on Dec. 9 at 10 p.m. Eastern.

MMA Fighting will update here throughout the night as the winners are announced, and we'll have behind-the-scenes comments from the winners, as well.

The show is a little late getting started, but should be underway soon. Lots of MMA celebrities – and mainstream celebs, too – on hand tonight at The Palms.

Referee of the Year
Herb Dean
John McCarthy
Dan Miragliotta
Josh Rosenthal
Mario Yamasaki
WINNER: Herb Dean
Herb thanks the best sport on earth and the best athletes on earth for his win.

Media Source of the Year
Inside MMA
MMA Fighting
MMA Junkie
MMA Weekly
Sherdog
WINNER: MMA Junkie
Congrats to the folks at MMA Junkie. This is their third nomination and third win.

Most Memorable Ring Entrance
Clay Guida
Muhammad "King Mo" Lawal
Tom Lawlor
Jason Miller
Anderson Silva
WINNER: Jason Miller
The show behind the show: Miller was back here in the post-win media room snagging a free water and realized his category was up. He was walking out as he won the award and was late getting to the stage ... entrance winner, indeed.