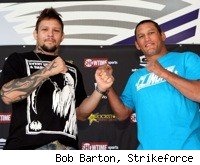 After seven months off, Dan Henderson is finally stepping back into the cage on Saturday night, hoping to earn his first victory in Strikeforce and first anywhere since knocking out Michael Bisping at UFC 100. Henderson will have a tough test against Renato "Babalu" Sobral in what should be an entertaining main event in Strikeforce's final card of 2010.

What: Strikeforce: Henderson vs. Babalu 2

When: Saturday, the Showtime broadcast begins at 10 PM ET.

Dan Henderson vs. Renato Sobral
Henderson beat Babalu 10 years ago in the final of the Rings King of Kings tournament, in what was one of the most significant fights mixed martial arts had seen to that point. Henderson, Babalu and the sport of MMA have all changed so much since then that I don't think there's much we can take from their previous meeting, though.

What I do think we can expect is Henderson to come out swinging, just as he did in his April loss to Jake Shields. But whereas Henderson gassed out early against Shields, and was dominated for the bulk of their five-round fight, I think we'll see a better Henderson at 205 pounds, and cardio will be less of a factor in a three-round fight. I like Henderson to get the better of the striking exchanges early in the fight, then use his wrestling to control Babalu on the ground and win a fairly one-sided decision.
Pick: Henderson

Robbie Lawler vs. Matt Lindland
Lindland is a lot like Henderson: He was one of the sport's truly elite fighters when he was at his best, but he's now 40 years old and past his prime. But while Henderson is "past his prime" like an NFL running back who has lost a step but can still be effective, Lindland is past his prime like a guy who just got cut by a UFL team. Strikeforce gave Lindland a gimme win against a guy with a career 3-2 record in May, but against a seasoned veteran like Lawler it's hard to see Lindland lasting long.
Pick: Lawler

Paul Daley vs. Scott Smith
Daley and Smith are both limited fighters who hit hard but can't do much else -- but from Strikeforce's perspective that may be a good thing, as this fight was booked more to give the fans some fireworks than to give them a well-rounded MMA display. I'll go with Daley to land a couple of hard shots to Smith's head to knock him down, then finish things off with a few more hard shots on the ground.
Pick: Daley

Antonio Silva vs. Mike Kyle
Kyle took this fight on five days' notice after Valentijn Overeem dropped out of his scheduled bout with Silva, and in my book that makes this event better: Kyle has a better shot of upsetting Silva than Overeem did. But even if it's a better shot, it's still a long shot, and the most likely result is that Silva wins a TKO.
Pick: Silva

Ovince St. Preux vs. Benji Radach
This fight was booked on even shorter notice than Silva-Kyle, with Strikeforce confirming the bout just four days before fight night. But as far as last-minute match-making goes, this is pretty good: St. Preux is coming off his biggest win to date, against Antwain Britt on the most recent Strikeforce Challengers show, while Radach is a good veteran who's had some hard times lately, with injuries keeping him out of the cage for more than a year and a half. I don't know what kind of shape Radach is in and how much ring rust he'll have, but if he's close to 100 percent, I think he has too much of an offensive arsenal for the relatively inexperienced St. Preux to handle.
Pick: Radach