Stephan Bonnar: This Is Only Way I Know How to Fight 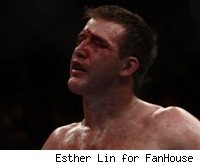 According to Stephan Bonnar, there comes a point in every training camp where it becomes so miserable it's almost fun.

"Every day you go through hell," said Bonnar. "Pretty soon you're like, I'm so sick of this. Then you settle in and it just starts growing on you. You kind of accept that the fun's over. It's probably kind of like being locked up in jail: the first month or so it sucks and you can't wait to get out, but then you kind of get used to it and you forget how the good life is."

Fortunately for Bonnar, he has a parole date in sight. Saturday night he faces Igor Pokrajac at The Ultimate Fighter 12 Finale, which means, if nothing else, that his suffering is about to come to an end. For now, anyway.

The 33-year-old Bonnar has spent the last five and a half years in the UFC, and in that time he's rarely had an easy night of work. He's not the guy who goes out and dominates opponents en route to one-sided first-round stoppages. Instead, he's the guy who gets bloody every time out, win or lose. He's the guy who blocks a lot of punches with his head, but never gets knocked out.

The good news is, Bonnar has finally made peace with that.

But while those performances are exciting for fans, they're taxing for fighters. Bonnar has paid the price for his style in the past, and spent more than a year out of the cage recovering from what he refers to now as "the Super Bowl of knee surgeries."

"They fixed so many things in one surgery, it was crazy," said Bonnar. "Then my first fight back I fought Jon Jones, and no one really knew who he was back then. I didn't really have my strength back, either. I felt so slow, so weak. People don't realize, I'm in my thirties. A year out and through all that rehab, it's not like you just heal up and there you are, back to your old self again."

In his last fight with Krzysztof Soszynski, Bonnar notched his first victory since 2007, though he still insists that he'll never think of his loss to Soszynski in the bout prior to that one as a real defeat – "not ever."

Still, in both fights Bonnar absorbed his share of punishment, even as he was giving some back. While he sees his tendency to start slowly and get stronger as the fight progresses as an immutable part of his style, Bonnar also admitted that it makes him wonder what the true cost of these performances will be later on down the road.

So far the synapses seem to be firing just fine. Bonnar received high marks for his ever-improving work as a commentator for the WEC, and is set to launch a new clothing line – Trash Talkin' Kids, an MMA homage to the Garbage Pail Kids of the '80's – in the coming weeks.

And while other fighters can only talk about the title shot they think must be right around the corner, Bonnar has other motivations, he said.

"At this point, I just want to keep putting on good fights for the fans. Watching the UFC all the time, you sometimes see boring fights and it just reminds me, man, I don't think I've ever been in one of those. I don't think I've been stood up in a fight or had a break for inactivity or anything like that."

And if those fights come at a price for him later in life? Well, he has a plan for that, too.

"Really, what I'm banking on is all the advancements they're making in stem-cell research. In ten years, when I'm hobbling around, I'll just take myself into a stem-cell clinic and get some fetuses IV'd to me. ...Okay, so I don't know how it works, but whatever it is I'm probably going to be a candidate some day for it."