State of the Strikeforce Lightweights 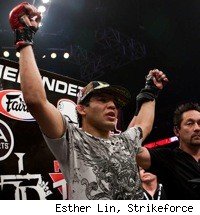 No, not really. At least not right now, where the best fight for Melendez really would be outside the organization. But as we look at the state of the Strikeforce lightweights below, we'll examine whether the promotion can beef up its lightweight roster and make bigger things happen in 2011.

Fights that will happen:
Strikeforce and Showtime don't have any lightweight fights scheduled.

Fights that should happen:
Melendez vs. Eddie Alvarez: Yes, I know all the business reasons that Strikeforce and Showtime don't want to use their own resources to promote Alvarez, who's under contract to Bellator. But after a 2010 in which big fights happened too rarely in the Strikeforce cage, it's time for Strikeforce to show MMA fans that it's serious about giving them the fights they want, and there's no lightweight fight outside the UFC that MMA fans want more than Melendez vs. Alvarez. Both fighters say they want it and Bellator says they're willing to meet Strikeforce more than halfway, booking the fight in whatever venue Strikeforce chooses. This is a deal that should get done, but probably won't.

Josh Thomson vs. Lyle Beerbohm: After Melendez, Thomson is Strikeforce's next-best lightweight. But while there's been some talk of giving him a third fight with Melendez, it would make a lot more sense to book these guys with fresh opponents. Beerbohm, who's got a 14-0 pro record and a great back story as a former prison inmate who has turned his life around, would be the perfect match-up for Thomson right now.

JZ Calvan vs. KJ Noons: Calvan is coming off a loss to Thomson, while Noons is coming off a loss to welterweight champion Nick Diaz. But even if neither one of these guys is exactly at the top of the promotion's lightweight totem pole, putting them in the cage against each other provides one of them with an opportunity to get back on track, and provides the fans with what would be a fairly entertaining scrap.

Others in the mix:
Justin Wilcox: Strikeforce has put Wilcox in the cage four times in the last 16 months, and he's 4-0, including a one-sided decision over Vitor Ribeiro on the November Challengers card.

Billy Evangelista: Evangelista is 11-0 in his MMA career and looked good beating Waachiim Spiritwolf and Jorge Gurgel in his last two. He's ready for a step up in quality of competition.

Potential breakout fighter:
Yes, Ryan Couture gets a lot more attention than he really deserves on merit, because of his name. But unlike Kim Couture, whom Strikeforce put in the cage for fights that didn't have any business being televised by a major promotion and major pay cable network, Ryan Couture actually looks like he has real promise in the sport.