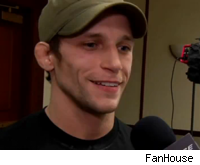 Jeff Curran entered 2010 on a path back into the WEC, but it didn't work out as he hoped.
While he waited for the organization to give him a specific date, Curran ended up taking a fight for Bellator in April, because he needed the extra money. Curran surprisingly lost the bout, eliminating any shot he had at one of his biggest goals for the year.

"[Fighting] is my only way of making a living," Curran said Monday on The MMA Hour. "I don't survive off my school. I actually support the school off of my fighting, so I had to stay busy and tried to do something ... and when we looked at the original matchup it was a great matchup."

What seemed like a great idea at first developed into something questionable at best when his opponent would change at the last minute and worse, Curran fell into a deep depression.

"I decided to leave my wife and put her through a bunch of back-and-forth and it was going on for the past ten months at that point and maybe past 12 months and I was just feeling really down on myself," he said. "I was seeing counselors, I wasn't getting any solid answers from the WEC. I was just really mixed up. Sometimes you just get lost and it's hard to find your way back, you know. Financial trouble, you name it, everything."

With his spirit down over the sadness he put his wife and sons through, Curran booked seminars away from home in order to "get away." The excursions would draw attention to his need to determine what he values most in life.

"My wife had given me a schedule of when I could see my boys," the 33-year-old Curran said. "This day, and this weekend and so on. And I overlapped my schedule with the one she gave me with the next two to three months that I was going to travel and I was going to see them like four times the next two to three months and when I saw that I took a step back and said, 'Man, what are you doing? Your priorities are all mixed up.'"

Curran then decided to focus on his family and noticed his situation in life improved. His cousin Pat won the Bellator Lightweight Tournament; Curran welcomed new prospects to his gym and business picked up again at his school affording him the opportunity to expand.

"I went through a counselor -- I went through a therapist that -- I saw her three times and she talked to me for the first time for about two hours and she hear my story and man, she made things make real sense to me and I just refocused and got serious."

Moving past this difficult year, Curran considers the present time the height of his spiritual wellness and he'll look to get back on track when he headlines XFO 37 this Saturday against David Lowe in Lakemoor, Ill.

"The last year of my life has been pretty screwed up," Curran said. "My family life, my personal life. I made a lot of bad choices that I've been clearing up and now I'm basically in a really good position."