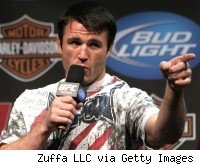 In the months leading up to his UFC 117 title challenge, Chael Sonnen had plenty to say. Sonnen seemed to be everywhere, talking up his potential to dethrone champion Anderson Silva in a middleweight championship match. More than 20 minutes into the fight, he was making good on his pre-fight boasting, seemingly on his way to a career-defining victory when Silva caught him with a fifth-round triangle/arm bar submission.

In the months since, Sonnen has had almost nothing to say publicly, his silence precipitated by a positive drug test in the days after the fight.

On Thursday in Sacramento, Calif., Sonnen will have his chance to defend himself from a California state athletic commission (CSAC) finding that he illegally used performance-enhancing steroids prior to the bout.

Over 100 pages of documents recently released by the CSAC give a clearer picture of the commission's contention that Sonnen cheated.

According to the documents, on Aug. 6 -- the day of his drug test -- Sonnen admitted to event supervisor Frank Munoz that he had taken testosterone as recently as the day before. In fact, Sonnen listed the substance on a section of the urine sample form in which the party to be tested is asked to divulge any medications or substances he has taken in recent days, including vitamins or minerals.

On the forms, the 33-year-old Sonnen listed "1 shot" of testosterone, which he stated he took on Aug. 5, just two days before his title match with Silva.

On a separate page, he also listed ingestion of 6 Advils, 1 tablet of Vitamin C, 1 tablet of Iron, 1 "Multivitamine" [sic] and 1 "Asprin" [sic] as substances he had taken in the preceding three days. Sonnen signed the forms under penalty of perjury. The next day, he went on to lose his title match in heartbreaking fashion.

According to CSAC time lines, Sonnen's urine sample was sent to the UCLA Olympic Analytical Laboratory, received on Aug. 10 and testing procedures began on Aug. 13.

On Sept. 2, the lab informed the CSAC that Sonnen's testosterone to epitestosterone ratio (T/E) tested at 16.9. Though testosterone is naturally occurring in the human body, that number is well above the T/E threshold ratio of 4.0. A follow-up carbon isotope analysis was conducted on Sept. 7, with the finding that the test results were consistent with the administration of a steroid. The lab subsequently sent the CSAC 66 pages of documentation with the intent of scientifically supporting their findings, establishing chain of custody of the specimen and proving the sample's integrity was maintained throughout the process.

On Sept. 16, Sonnen was sent notice of his results, suspended one year and fined $2,500. That penalty effectively knocked him out of a planned rematch with Silva.

It is unknown how Jacobs and Sonnen will defend the lab's findings, and in correspondence from California supervising deputy attorney general Karen Chappelle to Jacobs, she notes that Sonnen signed a declaration that he had taken a shot of testosterone, writing, "presumably you would not be challenging this specific finding." Messages from MMA Fighting seeking comment from Jacobs went unreturned.

There has been a suggestion in the media that Sonnen would claim testosterone replacement therapy (TRT) usage as a defense. TRT is a legitimate medical procedure when prescribed by a doctor in which testosterone shots are taken to address a deficiency. Though no one from his team has addressed the possibility, it is worth noting that Sonnen's management mentioned that he was consulting with his physicians in addition to his legal team in a statement made to MMA Fighting regarding his appeal process.

TRT is allowed under CSAC rules but requires necessary documentation from a physician and must be cleared by the commission well prior to a fight. Dodd has said that Sonnen never asked for an exemption for TRT, and Nevada state athletic commission executive director Keith Kizer recently told MMA Fighting that Sonnen has never asked for a testosterone exemption in Nevada, where he's had two of his last four fights, including the most recent one prior to facing Silva. In addition, fighters must still test under the T/E threshold ratio of 4.0.

Sonnen's appeal is agenda item No. 10 on a list of 15 items the CSAC is set to discuss, though the commission reserves the right to change the order of business.

If he is unsuccessful in his appeal, his suspension could run until Sept. 2, 2011.