A Decade After Unlikely Win Launched Him, Dan Henderson Hopes for Repeat 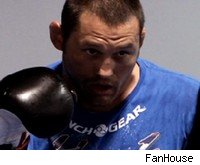 As the collision course that would ultimately pit Dan Henderson against Renato "Babalu" Sobral neared impact in February 2000, Henderson was a man without expectation of victory. He was too green, he was fighting in a tournament against men far more experienced than him, and the field was simply too deep. His only expectation was cold, hard cash.

"I was just broke and I needed the money," Henderson told MMA Fighting.

On Dec. 4 when they rematch, Henderson's goals and intentions will be quite a bit loftier.

That change in philosophy and motivation came somewhere in the intervening time, nearly 11 years. But his unlikely victory in the RINGS: King of Kings tournament -- punctuated by a finals win over Sobral -- surely helped plant the seeds for Henderson's rise as one of the sport's best fighters over the last decade.

"It was probably the biggest tournament ever at that time," Henderson recalled. "And it probably had one of the toughest fields. I didn't really have a thought about winning. It was open weight, it was in Japan, and I didn't think I could win any decisions there. I was going to do my damndest to try, and I did, but I didn't expect to win."

At the time, Henderson was a man indulging in a part-time hobby. He was still a competitive amateur wrestler, training in hopes of qualifying for the 2000 Olympic games.

I might not be as quick or whatever, but definitely I'm more skilled and a lot wiser with everything.
-- Dan Henderson It was a different world then; it was nearly impossible to make a living as a fighter, the sport had made barely a dent in the US sports culture, and Henderson decided to enter the tournament mostly because of the guaranteed show money.

Henderson was 29 years old at the time, with a 4-0 record when he entered the open-weight tournament, which featured several fighters who are still well known today, including Antonio Rodrigo Nogueira, Alistair Overeem and Renzo Gracie, along with Maurice Smith, who had captured the UFC heavyweight title two years prior, and Dave Menne, who would go on to win the UFC middleweight championship.

Henderson won his first two qualifying matches on October 28, 1999, advancing to the final, where he would be forced to win three matches in one night. He captured the first two, defeating two heavyweights: slugger Gilbert Yvel, and ground wizard Nogueira.

For the championship match, he faced the then-unbeaten Sobral, who was 12-0. The title fight went the distance and ended in a unanimous decision for Henderson. Winning three times in one night is a grueling task in itself, but just as impressive is the fact that Henderson won the final after tearing the MCL in his knee during his semifinal bout against Nogueira.

"The match was somewhat uneventful," Henderson said. "I controlled the action, stopped takedowns and did more damage, but I remember being really tired in the final after going through the first two fights. I think I had about 20 minutes to recover before I fought Babalu. It's mostly memorable because it was the finals of a tournament and I won a lot of money."

Henderson and Sobral both expect the sequel to be far more interesting and explosive than the original, which for better or worse launched him as a major force in the sport. The rematch takes place as the main event of Strikeforce: St. Louis at the Scottrade Center.

I know 40-year-old me would kick my 30-year-old ass right now.
-- Dan Henderson A lot has changed in 10+ years. Both men have worn gold; Henderson was a two-division champ in PRIDE, while Sobral was briefly the Strikeforce light heavyweight champion. Both men have rounded out their skill sets; Henderson is now better known as a striker than a wrestler, while Sobral has added effective striking of his own to go with his jiu-jitsu pedigree.

Back then, though, Henderson would have never though he would get here. At the time, his body was so banged up from wrestling and fighting that he thought he'd only compete in MMA for a year or two before calling it quits.

"I was dealing with a lot of injuries trying to make the Olympic team in 2000," he said. "It was just because of the quantity of competitions I had. I'd get hurt, and you've got to compete through the pain, which makes injuries worse sometimes. But when I quit wrestling in 2001, I started feeling better. Ten years later, I'm still fighting."

Henderson does so with the idea of getting another championship around his waist, though he says he'd also be content with major fights going forward. He says the possibility of fighting MMA legend Fedor Emelianenko is "still intriguing" and would be "an honor," and a future date against Strikeforce light heavyweight champ Rafael "Feijao" Cavalcante "sounds like it would be a fun one."

But after the seven-month layoff between his fight with Jake Shields and the Babalu fight, Henderson also has another, more simple goal of being more active. He promises that he'll fight again in March and then June.

Now 40 years old, Henderson knows that part of holding off Father Time is staying active and training smart. It's experience, not age, that has changed him from the fighter who fought Sobral so many years ago, in a place so far away. Both he and Sobral have evolved so much, they're hardly recognizable from the undefeated pair who fought in 2000.

"I might not be as quick or whatever, but definitely I'm more skilled and a lot wiser with everything," he said. "I know 40-year-old me would kick my 30-year-old ass right now."