Greg Jackson Fires Back at Dana White Over Recent Criticism 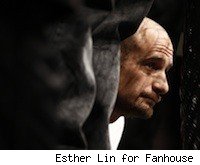 MMA trainer Greg Jackson isn't pleased with some of the recent comments coming from UFC president Dana White, so he decided to do something about it. With White criticizing the Jackson camp for what he describes as a boring, conservative approach to fights, Jackson is firing back with a weapon of his own: statistical analysis.

On Monday night Jackson sent MMA Fighting an email listing all the bonus awards and finishes tallied by his fighters in Zuffa events in 2010. The list includes the names of 20 Jackson camp fighters who competed in the UFC or WEC in 2010, but perhaps the most telling figure is the distribution of UFC's bonuses after each event, Jackson explained.

"Here's a quick stat for you. So there's been 22 [UFC events] this year? We had 12 bonuses so far this year," Jackson said in a phone interview. "So one out of every two, one of my fighters got Submission of the Night, Knockout of the Night, or Fight of the Night."

It's the kind of statistic he wishes White would have looked at before telling CSN Washington that Jackson's fighters were being too conservative in their efforts, saying, "There's obviously some consistency there with the Jackson camp and being safety-first."

"We sat down and did the math after we heard that," Jackson said. "He wants to say there's a consistency? Okay, let's look at statistical consistencies. Let's look at Jon Jones, who has finished every fight with me in the first round, except for that Matt Hamill one, which would have been a first-round stoppage anyway if he hadn't thrown that illegal elbow.
It didn't bug me until Dana said it. Fans are fans, but Dana said that and, you know, I've worked really hard in his organization. If you look at my stats, they're insane. Imagine you give your life to something and then your boss comes up and says, 'Man, you suck.'
-- Greg Jackson
"Let's look at Carlos Condit, who had Fight of the Night and Knockout of the Night. Even people on the undercard who people don't really know yet. Kyle Noke, two finishes, both in the second round. Almost everybody on our team finishes consistently. There's no fact. Everybody's just making stuff up."

Much of the recent criticism from White stemmed from what he regarded as bad advice in the corner of Nate Marquardt during his recent number one contender fight with Yushin Okami at UFC 122. White said Marquardt was clearly losing the fight, yet his corner – led by Jackson and Trevor Wittman of Denver's Grudge Training Center – didn't communicate the urgency of the situation to him.

But according to Jackson, White only thinks he knows what Marquardt was being told throughout that fight.

"He didn't hear what I was telling Nate Marquardt. Me and Trevor were screaming. Listen to the audio. At one point in the third round, I yelled at Nate very clearly, 'Nate, you have a minute and a half to knock this guy out; you must get a knockout.' As clear as day, and I asked Nate if he remembered me yelling that. He said, 'Yeah, I heard you say that.' I was screaming at him. I thought we had lost the first two rounds."

He's heard the criticism from fans and commentators before, Jackson said, and has tried to let it roll off his back. With as many fighters as he has in the UFC, he pointed out, there's going to be a bad night every now and then, and some people are bound to distort the statistics in their own minds without ever bothering to find out if they're supported by actual numbers.

But when he heard the stiff criticism from the head of the world's top MMA organization, Jackson said, that stung a bit more than your normal message-board chatter.

"It didn't bug me until Dana said it. Fans are fans, but Dana said that and, you know, I've worked really hard in his organization. If you look at my stats, they're insane. Imagine you give your life to something and then your boss comes up and says, 'Man, you suck.' Well, wait a minute, just this year alone, half your bonuses have gone to my guys. So what are you talking about?"

One good thing has come out of all the recent criticism, however. Without it, Jackson admitted, he probably never would have done the math and found out how well his fighters were performing.

"It was a morale booster for me, anyway," he said. "It's nice to have cold, hard facts sometimes."