UFC-WEC Merger Brings Excitement, Warning About Jobs on the Line 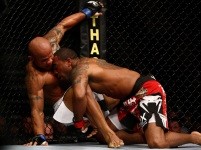 In theory, a bantamweight fighter shouldn't be able to end a heavyweight's career, but that's the exact scenario that is likely to play out at some point over the coming months as the UFC and WEC officially merge and fighters jockey for precious roster slots.

With the Jan. 1 addition of the bantamweight and featherweight divisions in the UFC – bringing the total of weight classes to seven – the number of fighters looking for jobs will rise, but the total number of slots available to fighters is expected to hold steady.

That means fighters who might have gotten one more chance in the past after a questionable performance might no longer be so lucky. Instead, they might find themselves on the outside of the octagon looking in.

"It's a dog-eat-dog world," UFC president Dana White said in the hours after UFC 123. "There's so many good guys out there, you're literally fighting for your UFC life every time you fight."


Among the first casualties of the new era is Gerald Harris, a 31-year-old middleweight who had a 10-fight win streak snapped in a unanimous decision loss to newcomer Maiquel Falcao at UFC 123. Just hours before, Harris seemed like a rising star, with three straight wins in the UFC, all by knockout, and a first-ever slot on the main card of a pay-per-view.

His match with Falcao, however, was widely considered lackluster, and long stretches were loudly booed by the crowd at The Palace of Auburn Hills in Michigan. Afterward, in the post-fight press conference, White noted his dissatisfaction with the bout, with his criticism even extending to the winner Falcao, for his inactivity in the third round (according to Compustrike stats, Falcao threw only seven strikes over the last five minutes). Still, in the past, Harris likely would have received a pass for his performance. But on Tuesday, Harris, the owner of a 17-3 record, was informed he was cut.

"It's no different than any other professional sports organization," White said. "It's exactly the way it works. You want to stay at the top of the food chain, you deal with it. If you don't, you won't. You know how many guys get cut by the NFL and Major League Baseball every day? It's crazy, staggering. Same thing here, no difference."

Harris, who fought four times for the UFC in 2010, was understandably surprised by the decision, though he restrained himself from public comment except to thank fans for their support. Fans quickly rallied to his side on social media platforms, protesting his dismissal from the company on Twitter and on message boards, but it was not immediately clear if the grassroots campaign would change White's mind. There is precedence for it.

White gave Karo Parisyan a second chance in the UFC after once saying he'd never again fight for the promotion. (After a first-round knockout loss at UFC 123, Parisyan, like Harris, was cut.) Similarly, it seemed that Tito Ortiz's days were done after his winless stretch extended to five straight matches with a loss at UFC 121 in October, but White caved after Ortiz personally asked him for one more chance.

White of course has the power to change his mind, but he noted that he made special exceptions in those instances for "guys who have put on a lot of great fights for me over the years." Younger fighters and others with no history of drawing power won't have the same leverage.

Even winning will not bring immunity from losing a job. White couldn't remember recently cutting someone who had won, but noted his growing impatience with fighters who get in the cage and refuse to engage.

The UFC has examined the cold, hard numbers of the merger and come to the conclusion that their roster will still house roughly 200 fighters under contract at any given time. In the past, that meant about 40 fighters for each of five divisions. Now, it's roughly 28 men for each of seven divisions.

The reason the roster is not expanding is because Zuffa staged 32 events last year (24 UFC, 8 WEC), but with the loss of the WEC brand, the company is likely to stage only 26 events in 2011. White feels that the promotion has essentially maxed out the number of annual pay-per-views at about 15 or 16 per year, so that would leave 10-11 free events to be broadcast between cable partners Spike and Versus.

That number could increase if a new television deal is struck, but if it doesn't, that's a net result of around 60 fewer matches over the course of 2011. So growing the roster would actually result in a glut of more fighters with fewer shows on which to put them.

The most obvious place for contraction is among the lightweights, with overarching divisions in the UFC and WEC that will probably result in matchups where fighters are essentially fighting for their jobs; winner stays, loser gets a pink slip.

It seems cruel and unfair, but such is the nature of sports that you either perform to the boss' liking, or they'll find someone else who will.