Gilbert Melendez vs. Shinya Aoki II Not Happening at Dynamite!! 2010 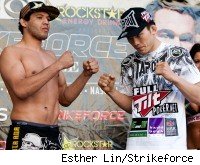 Melendez defeated Aoki via unanimous decision in April at Strikeforce: Nashville. Strikeforce was expected to return the favor by sending their 155-pound champion to Japan to fight Aoki on the annual New Year's Eve show.

One of the major stumbling blocks is that Melendez's contract with Strikeforce is coming to an end, and while he does have a championship clause, which allows the organization to continue booking fights for him as long as he champion, it proved difficult to get him to fight in an another promotion without a finalized long-term deal.

According to Kogan, FEG will look to keep Aoki on the card against another opponent.

Asked whether there was a chance the fight could be saved in the coming weeks, Kogan admitted that anything could happen but that it is currently off the table.

"It's not a problem with anyone," Kogan said. "It's just a deal couldn't happen. Everyone is very upset."

Bibiano Fernandes is scheduled to defend his DREAM featherweight title against Hiroyuki Takaya on the card, along with a whole host of other uannounced fights.