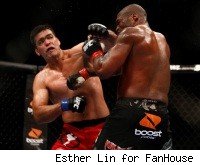 There were already some who questioned the outcome of the UFC 123 matchup between Quinton "Rampage" Jackson and Lyoto Machida in the seconds after the official decision was read in Jackson's favor. Jackson opened the door for controversy even further when he admitted Machida "whipped" him in his post-fight comments (which by the way, he later recanted).

Machida seemed to take the decision without much protest, but he and his manager Ed Soares clearly believe that at least two of the judges erred in scoring it a split decision for Jackson.

"Lyoto thinks he won," Soares said on Monday's edition of The MMA Hour. "After the fight, he didn't have any doubt. He was convinced he won the fight. It was a big shocker to him, too."

Compustrike numbers showed a close fight, with Jackson out-landing Machida 59-38 over three rounds. Machida clearly won the third round with a powerful scoring combination that staggered Jackson and led to a takedown and ground control for much of the final frame, so the controversy stems from the first two rounds.

In the first, Jackson outlanded Machida 25-12, though several strikes came from knees to Machida's legs during a clinch. Judges Jeff Blatnick and Sal D'Amato scored the round for Jackson 10-9, while Doc Hamilton awarded it to Machida 10-9.

In the second, Jackson landed 21 strikes to Machida's nine, and Jackson also scored a takedown. All three judges scored that round for Jackson. Machida turned the tables sweeping the scorecards in round three, but the result was a 29-28, 29-28, 28-29 split decision.

Soares said he's watched the fight three times trying to see what the judges were seeing, and he still believes Machida won.

"I watched the fight wanting to see Quinton win," Soares said. "I don't want to sit here saying, 'Oh, it's bad judging.' I wanted to see what Quinton did to win that. In the first round, I think Lyoto did enough to win that first round. People will say, 'Oh, but he wasn't aggressive.' But that's Lyoto's style. And they'll say, 'octagon control.' That depends on how you look at it. At the end of the day, Lyoto was doing what he wanted to do to put Rampage where he wanted him. He had Rampage chasing him and that's what Lyoto likes, is to find those openings."

Soares took heat from some after he could be seen in the cage telling Jackson the decision was "bull----."

The noted MMA manager said he's had a longtime friendship with Jackson that supercedes MMA, and that the two often speak to each other with blunt honesty. Still, he said he regrets the timing of the comment.

"I had no idea the camera was on us, and I was just talking to him friend to friend," Soares said. "I thought it was bull----. After the fact, I thought about it and felt bad and I apologized to him at the hotel. I thought Lyoto won the fight. He said, 'You don't have to apologize to me, man.'

"I got mad love for Rampage, and I think he's got love for me," Soares continued. "We're friends, and I feel that's one thing about friends is that you can be honest with each other. By no means did I mean to disrespect him on national television. I had no idea the camera was on, to be honest with you."