Early End to First Round Cost Maiquel Falcao at UFC 123

Maiquel Falcao has been cr 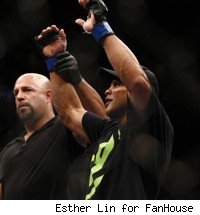 iticized for his handling of the third round in his UFC 123 win over Gerald Harris, with UFC President Dana White admonishing Falcao that he was wrong to play it safe after winning the first two rounds on the judges' scorecards. White said his message to Falcao after the third round was that "This isn't the Ultimate Staring Competition, it's the Ultimate Fighting Championship."

But while it's true that Falcao was unimpressive in the third round, it's been widely overlooked that the fight never should have gone to the third round -- or even the second round.

In fact, Falcao was about to submit Harris at the end of the first round, but the horn to end the round sounded seven seconds early, depriving Falcao of what almost certainly would have been a first-round submission victory.

With 16 seconds to go in the first round, Falcao sunk in a rear-naked choke, and Harris was in big trouble. With 11 seconds to go, Falcao had his left forearm in tight under Harris's chin. They both fell backward with nine seconds left, and Harris briefly held up his left hand as if he were going to tap out. With eight seconds left in the first round, UFC announcer Joe Rogan screamed, "He's got it!"

And then the horn sounded, ending what was supposed to be a five-minute round after 4 minutes, 53 seconds. Falcao kept holding the choke for another second before referee Dan Miragliotta pulled him off Harris, and Miragliotta then admonished Falcao. For his part, Harris looked to Miragliotta and said, "He held it too long."

But while Harris was right that Falcao should have released the choke as soon as Miragliotta told him to, Falcao may have been confused because the round ended just a couple seconds after he heard the 10-second warning.

Home viewers may not have noticed because the UFC's TV producers typically remove the clock from the corner of the screen in the last few seconds of the round, but there's no question that the first round ended seven seconds early, and it's doubtful that Harris could have withstood another seven seconds of Falcao's choke without either tapping out or passing out.

It's now incumbent on the UFC and the Michigan Unarmed Combat Commission to undertake a thorough investigation of what went wrong and why. Whether it was foul play on the part of a timekeeper who wanted Harris to win or simply an honest mistake that happened at a terrible time for Falcao, clock errors of that kind can't be tolerated.