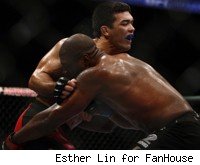 AUBURN HILLS, Mich. -- This is the UFC 123 live blog for "Rampage" Jackson vs. Lyoto Machida, the main event of tonight's pay-per-view at the Palace of Auburn Hills.

Jackson vs. Machida is a headliner featuring two former champions coming off a loss. Jackson (30-8) lost Rashad Evans at UFC 114 in May. Machida (16-1) was knocked out the same month at UFC 113 by Mauricio "Shogun" Rua.

Machida walks out first, wearing his karate gi. Jackson walks in to the PRIDE theme song. This is because he said he wants to go bring back the old Rampage. He's howlin' like a mad man on the way in too.

Round 1: Jackson stalks Machida around early, his right hand cocked back and ready to fire. Machida lands an inside kick. It becomes a trend as Machida goes to the same kick repeatedly. Jackson comes forward with a combo but Machida avoids the strikes. Jackson throws a wild hook that misses, then clinches Machida against the fence. Rampage knees Machida's legs, and Jackson lands a right hook as Machida backs out. Another clinch against the cage and Jackson foot stomps. Machida turns him around and they break with :45 left. Jackson comes forward at the 10-second mark and lands a combo. Jackson takes the round with his aggression and cage control, 10-9.

Round 2: Machida with a knee to the body early. Jackson muscles him into the fence as the fans chant for him. The ref separates them after a low blow. Machida keeps threatening with the high kick but hasn't thrown it. They clinch again. Machida goes with knees to the body but Jackson powers him to the mat with a takedown. Machida uses the cage to get back to his feet. Rampage just misses with a right hook and Machida clinches. Jackson lands an uppercut to the body. They break and Machida lands a kick. Jackson uppercuts him with some power and Machida backpedals. Machida clinches again, trying to take Rampage down but he can't. Rampage breaks free with 10 seconds left. Machida lands a kick near the horn but it's not enough. Jackson 10-9.

Round 3: Jackson comes out with a leg kick that misses. Jackson fires off a left hook/straight right combo that doesn't land flush. Machida is avoiding most of Jackson's heavy fire now. Machida suddenly scores with a left hook that backs Jackson up. He flurries with knees to the body and head, and Jackson fires back wildly. Machida takes Jackson down and looks up at the clock. About 3 minutes left. He's in half-guard and tries to pass but Jackson holds the position. He moves to a kimura attempt. Machida then moves to full mount with 1:30 left. He goes for the arm bar and Jackson starts to lift him for the slam so Machida lets it go. The crowd explodes at the sequence. Another clinch from Machida, who drops for another takedown try. Jackson ends up on top but Machida goes for an omaplata as time runs out. Machida 10-9.