Rampage Jackson on Lyoto Machida: 'When He Does Get Hit, He Goes Down' 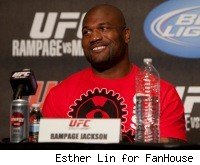 DETROIT -- Rampage Jackson has repeatedly stated his belief that he is a fighter, and Lyoto Machida is a mixed martial artist, and that there is a significant difference. The former has a willingness to take risks and endanger himself in an attempt to finish the fight; the latter is more prone to take the safe route to victory.

But Jackson said there's a price to pay for what he belives is Machida's reluctance to engage: he doesn't know how to take a hit. Jackson said it's a fact that became obvious to him while watching Machida's most recent fights.

"I let people hit me in sparring sometimes to get used to it," Jackson continued. "Some people say they don't mind getting hit. I actually like getting hit. It doesn't bother me, somebody punching me in my face."

At UFC 123, Machida will be for the first time in his career coming off a loss -- a knockout loss at that -- a fact that makes some question if he'll come out even more tentative than usual.


Machida downplayed the past result, saying he's always had a short memory when it comes to his fight results.

"I always go into every fight trying to forget about what happened in the past, whether I won or lost," Machida said through his interpreter and manager Ed Soares. "This is no different. I forget about last fight and it's a new challenge every time."

Jackson is known to have an iron chin and in his own words, doesn't mind getting hit, but he noted from personal experience that the mind games of coming back from your first-ever knockout loss are a real issue, not one that can simply be ignored.

"I remember my first time getting knocked out by Wanderlei, and then my next fight I didn't fight the same," he said. "Even me, I was trying to be elusive. It's one of those things, we're going to see what type of mentality he has. Some people can overcome it, but average people can't overcome it."

Jackson admitted he'd have to wait until he was in the cage with Machida to truly know whether he had a good understanding of Machida's spacing, timing and confidence, but he also noted a willingness to push forward and force exchanges, likely with the intention of goading Machida into an opening he can exploit.

"Honestly I'm going to go out there and try my best to be aggressive and fight a good fight," he said. "I don't care about his fights and last performance. That's like the last of my worries to be honest. But there's a reason why he doesn't get hit that much. But when he does get hit, he goes down. We all see that."