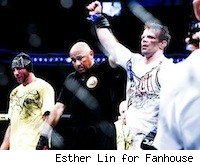 This Saturday at UFC 123 in Detroit, welterweight Dennis Hallman faces Karo Parisyan in a battle of two MMA veterans who have 25 years worth of experience between them. For the 34-year-old Hallman, it will be his 62nd pro fight, at least according to one version of his record, though the true number is a little tougher to pin down, even for Hallman. Now, in the second installment of MMA Fighting's new feature "My First Fight"), Hallman looks back at his initial foray into the sport that would one day become his career.

In the winter of 1995 Dennis Hallman got a strange phone call. He didn't know what to make of it at first, though in retrospect it probably changed the course of his life.

"There was a kid named Bobby Jacobsen who was a couple years older than me, and he was sending videotapes into [MMA organization] Battlecade of himself sparring and fighting and stuff," Hallman remembers. "He got my number from someone in our high school and he called me up and said, 'I want to fight you on tape.' I was like, what? You want to fight me? For what? I don't even know you."

Hallman was 19 years old and a former high school state champion wrestler in Yelm, Washington. The latter was what interested the aspiring fighter who had called him up in search of a competent opponent for his audition tape. Once Hallman heard it explained, it actually didn't seem like such a bad idea.

"I came to his garage and fought him and I guillotine choked him," Hallman says. "He was like, 'Hey man, you'd be good at this. You should train with us and try to compete.' I was like, 'Okay. I like wrestling and I guess I'm not terrible at this since I just beat you, so teach me.' It took me a minute to figure out how not to get triangle choked, but then it just kind of rolled downhill for me."

Three months later Hallman did a brief exhibition bout against 15-year-old opponent who he still remembers for his almost unreasonable toughness, then a few months after that, in the spring of 1996, he got his first "sanctioned" MMA bout.

"May 18, 1996," Hallman says without a moment's hesitation. "It was at Matt Hume's gym, AMC Pankration in Kirkland, Washington. There was probably 300 people in there. They did a lot of kickboxing shows back then, and there would be three or four pankration bouts on every show."

Modeled after the Pancrase bouts in Japan that made early MMA fighters like Bas Rutten famous, the fighters wore shin-guards but no gloves. Strikes to the head were open-handed, but strikes to the body were closed-fisted.

"He was like the 1992 Japan shootfighting champion or something. He came to AMC to learn from Matt Hume, and I was just a local kid," says Hallman. "My dad was there, and he was super worried because he was watching these other fights happening before mine."

Hallman's was over fairly quickly, or at least it seemed that way at first. Noritsugi shot for a takedown in the opening seconds and Hallman locked up the guillotine choke, which was quickly becoming his go-to submission.

"He tapped out, I think like, 20 seconds into the fight," Hallman says. "He was really bummed and he said something along the lines of, you know, he didn't want to tap out. The language barrier was kind of tough, so I'm not sure. But I said, 'Okay, let's fight again, then.' Then the whole crowd got excited by that, and we just went ahead and fought the rest of the fight."

The second time they went the distance – which at the time consisted of one five-minute round – and Hallman won a decision. His record lists only the second win, as if he had nullified the first by offering to continue the fight.

But that kind of thing was not so uncommon back in 1996, Hallman points out. MMA was such a new sport in North America, everyone seemed to be making it up as they went. Back then, he says, no one thought it would turn into a legitimate sport and steady source of income for the fighters. Most of the time they were just hoping they wouldn't get into trouble for it.

"In 1998 I fought a fight in Canada against a guy named Leigh Remedios, and they told us before the fight that if the cops came to say we were filming a TV show," Hallman says. "It was just...we were allowed to kick in the balls in these fights, the rules were whatever we wanted. It happened to be my fight though that, in the middle the Mounties came in and we had to stop and be like, 'Yep, we're just shooting a video here.' Then they left, we restarted the bout, and I finished it. So it's like, back then we were worried about going to jail. That wasn't that long ago, really. It's funny how money changes everything."

That's why it's so strange to him that in 2010 he's in the UFC, fighting in front of sold-out arenas with pro athletes and movie stars watching from the audience. He's had so many fights by now that it's hard to keep track of them all, he says. Sometimes he'll see a fighter at an event and know that they faced each other once, even if he can't remember the guy's name right away.

He still has the VHS tape of that first fight against Noritsugi, he says. Sometimes he even gets it out and watches it. Maybe by the time his four kids are grown it will be a priceless family heirloom. Or maybe it will just be a relic that can always send him back in time.

"It's pretty choppy, but it's interesting to go back and watch yourself," he says. "My skills were pretty terrible back then. But I guess it was good for 1996."