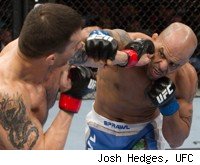 After two failed attempts to pit Jorge Rivera and Alessio Sakara in a middleweight contenders bout ended without the two ever squaring off, the UFC is moving on from the proposed matchup.

Rivera will have a significantly higher-profile bout the next time around. He will face Michael Bisping at UFC 127 on February 27, the Massachusetts fighter told Kimura.se in a video interview just hours after his match with Sakara was scratched at UFC 122.

Rivera was left without an opponent just hours before he was supposed to fight Sakara after the Italian striker came down with violent, flu-like symptoms that made it impossible for him to fight.

The match was originally supposed to be in August 2010, but that match never happened after Rivera broke his arm during training.

Rivera (18-7) is the winner of three straight fights, most recently defeating Nate Quarry via TKO at a UFC Fight Night event in March 2010.