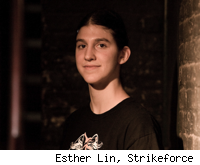 Modafferi made the announcement Sunday on her personal blog, saying she received a letter on Friday from the company notifying her of her release.

"I'm pretty bummed out," Modafferi said in her blog post. "There are still women I want to fight in that organization! But I really had an amazing time. I can't discount these experiences ... they were so valuable for me, and enriched my life."

Modafferi lost both of her fights for Strikeforce. Her debut for the promotion came a year ago on the Fedor vs. Rogers card in suburban Chicago. She rematched current Strikeforce women's welterweight champ Marloes Coenen, whom she had beaten by split decision in Japan in 2007, but lost by armbar quickly into the first round.

Modafferi (15-6) then took a pair of fights outside the promotion, including a rematch in May against Tara LaRosa at Moosin's God of Martial Arts show in Massachusetts. LaRosa beat Modafferi in 2006 and entered the rematch widely considered the top women's fighter in the world with a 15-fight winning streak. But Modafferi ended that streak with a split decision win that helped get her a title shot in Strikeforce.

But in that title fight, then-champ Sarah Kaufman delivered a highlight-reel power slam late in the third round that knocked Modafferi out of the fight – and out of the organization.

"A loss is a loss," Modafferi wrote in her blog post. "Losers don't get anything. They get the ax. Only winners earn the spotlight. Now I have to bust my (butt) and hope I'll have the opportunity to avenge myself against Marloes and Sarah."

Modafferi, a Delaware native who lives and trains in Japan, does said on her blog that she has been battling a back and eye injury. She does not yet have another fight booked.