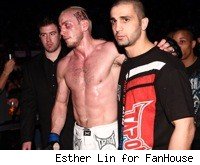 Former UFC welterweight Jonathan Goulet is contemplating retirement after suffering his 12th pro loss this past weekend in Montreal.

"The Road Warrior" lost via 2nd round knockout to Chris Clements (7-4) at Ringisde MMA 9, and following the loss he took to Twitter to announce that he was leaning towards ending his nine-year MMA career.

"Unfortunately, I lost my fight. Personally, I think this is it for me. I won't make a rash decision, but my decision is made. I will sleep on it and will give you news on Monday."

According to Goulet's agent, Ken Pavia, his client hasn't made a final decision yet on whether to continue his career. Pavia did add that the punch that knocked out the 31-year-old Canadian was, in his opinion, one that landed in back of his head and that Goulet doesn't remember it.

Goulet, 23-12, was released from the UFC after losing via TKO to Marcus Davis at UFC 113 in Montreal. His UFC record was 4-5, with notable wins coming against Jay Hieron and Luke Cummo inside the Octagon. He's 1-1 since leaving the organization.