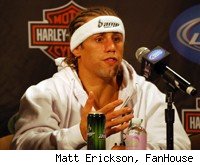 Faber, a heavy favorite in his first fight at bantamweight after dropping down from featherweight, won the promotion's Submission of the Night bonus for his first-round rear naked choke win over Takeya Mizugaki. Because of the angle, it was hard for referee Josh Rosenthal to check Mizugaki's hand to see if he was out and he ultimately had to roll both fighters over to wave off the bout.

WEC general manager Reed Harris said the choice between Faber and his Team Alpha Male teammate Joseph Benavidez for the submission bonus was tough. Benavidez submitted Wagnney Fabiano with a guillotine on the main card. But Faber stepped in and gave Benavidez a nice surprise. "We're gonna just split (the bonus)," Faber said

Koch was the card's Knockout of the Night winner for a TKO of promotional newcomer Francisco Rivera. Koch delivered a kick to the head that dropped Rivera, and he followed it up with a quick strike on the ground to earn the stoppage. Rivera took the fight on short notice after Koch's original opponent, Josh Grispi, was moved into a featherweight title shot against champion Jose Aldo at UFC 125 on Jan. 1.

And the Fight of the Night bonus went to Swanson and Semerzier, who battled back and forth for three rounds in the second bout of the night with a little bit of everything thrown into the works. Ultimately, Swanson won a split decision.

WEC 52 took place at The Pearl at The Palms Casino Resort in Las Vegas. Harris said the show was sold out, though gate numbers were not immediately available. WEC 52 is the second-to-last show for the promotion before merging into the UFC in January.