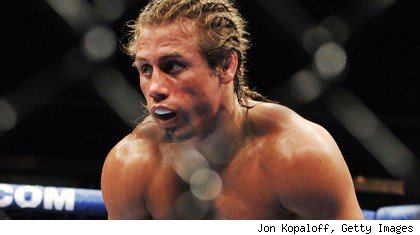 For four years – the entire time Zuffa has owned the WEC – Urijah Faber has been the face of a promotion. A long-reigning featherweight champion, Faber became the only WEC star whose popularity could rival that of any UFC counterpart.

With the recent announcement that the WEC would merge into the UFC, it seems Faber will finally have his place among the sport's biggest superstars, but fittingly, that time won't come until he headlines one more WEC event, the penultimate show in company history. If all goes according to his plans, Faber will take on and defeat Takeya Mizugaki at WEC 52 on Thursday before declaring his presence in the UFC.

With time running out on his days as a WEC star, Faber took some time to speak with MMA Fighting about his last time in a WEC cage, holding a UFC belt, and the possible rematch against the only guy he doesn't like in MMA, Dominick Cruz.

Mike Chiappetta: Mizugaki is an exciting, game fighter. Is that the type of fighter you enjoy going up against?
Urijah Faber: Yeah, I love the fact that he's going to fight to bitter end. He's got a real aggressive style. I think he matches up great with me. I definitely think we'll make for an exciting fight and I'm looking forward to winning.

Is it hard to not think about the potential title shot that awaits you if you win the fight?
Not really. I haven't really thought much about it other than being a little bit excited. I'm really focused on this fight and working on my diet. The diet is taking a lot of my focus because I look forward to meals so much and I'm so strict with it. So I'm pretty occupied with this fight.

Has the weight cut to 135 been more challenging than you thought?
No, it hasn't been. It's actually about as I thought it would be. Not too difficult. I was always really great at cutting weight in college when I was a 133-pounder. I feel like I'm at my most competitive weight right now. I've been fighting up for a long time, not that I was weak at that weight, I just was not having to cut much. This is a great weight for me.

With people knowing the WEC is winding down and down to its last two shows, do you think you'll have more eyes on you?
Maybe. With the diehard fans and also there's been a lot of stuff in the news because of the merger, so more people are aware of it. I don't know what to expect. Are people going to wait until we're in the UFC, or are they going to tune in to see this? I don't know how it's going to be received but it's definitely a unique thing. All I know is there are going to be some amazing fights. The UFC spent a lot of time promoting the Lesnar fight right before this, so hopefully people know about us. The people who know about it are going to watch it.

Do you think you'll find yourself a little nostalgic knowing it's your last time in a WEC cage?
No. For me, it's the same thing. I've always considered [WEC and UFC] the same. I've been part of the MMA picture for seven years now. I've been in the corner for a lot of UFC's and for a lot of WEC's. It's all the same people. The same guys write the checks, the same guys pick me up in the morning. It's the same team.

If you win it's possible we may see a rematch between you and Dominick Cruz. You're known as a mellow guy but you don't hide your disdain for Cruz. What are the origins of it?
He just kind of rubs me the wrong way. I think it started when we fought the first time. He was kind of disrespectful. We signed these posters for charity and he signed his name over my face, blatantly. I don't know what he was thinking. It's kind of a little insight that he's kind of a dope. I just don't like how he carried himself. It's one thing to be a gracious winner, but to be a gracious loser is a whole different story. I mean, he's probably grown up a little bit since then but that left a bad taste in my mouth. There's a lot of people I do like, only a few I don't. Nothing too specific other than the fact I just don't think he's that cool and that he's a guy I might have to fight.

How rare is it for you to have those types of feelings about a fellow fighter?
The thing is, everyone's always asking about it. I probably wouldn't say anything but everybody always asks about it. I'm the type of guy that speaks his mind and I'm real, so if you ask me, Do I like Rafael Assuncao? I like him a lot, he's a really good guy, very respectful. Same with Jose Aldo and Mike Brown and Jens Pulver and most of the guys I fought. Dominick just rubs me the wrong way. I don't know how to describe it, he's just immature and disrespectful.

On the flip side, as the champ, he clearly has some skills. What do you think of Cruz's game and would a rematch excite you?
Definitely, I feel like he's gotten a lot better. He's at his best right now and we're going to test me on the 11th to see if I'm at my best. I truly believe I am. And I think it would be a great fight.

You're a motivated guy but going through the everyday grind of MMA, would you like a fight like that, one to stoke the fires?
Yeah, I think it would be great. If I got to choose who I fight, I wouldn't be fighting people who are my friends. Of course I root for the guys who are more my friends when I watch them. If I had it my way, I'd fight all people I don't like, but there's just not many out there.

What is your feeling toward Mizugaki? Respectful?
I can't really communicate with the guy but he seems like he's nice enough. He's got the warrior spirit and I like that, so he seems cool.

You've accomplished so much in your career already. What is your biggest motivation now?
My motivation is to continue to live my dreams and the life that is all about my passions. I basically am fighting because I love it, and I have a real desire to be the best. My goal is to be a champion. Being a UFC champion is one of my longest-lasting goals and this is what I want to do with my life.

All that said, do you ever have days when it's hard to stay motivated? Is it ever a challenge for you to get into the gym?
I'm pretty god at separating real life from the gym. Even if there are ups and downs in the gym, life is pretty good for me in general. I'm surrounded by people that I really love and I enjoy what I do. I don't really get the burnout thing that some people talk about.

What would it mean for you to be a UFC champion?
I think part of being the world's best is being recognized as the world's best. As far as recognition goes, being UFC champion in the eyes of people around the world is more prestigious, so that's something I think is important.

Many people would like to see the Cruz rematch. Others want to see you fight Miguel Torres next. What are your thoughts on that possibility?
I think that'd be a good fight also. Miguel's a guy with a good name and he always brings a great fight so I think it's one that people would love to see.

How does Faber-Mizugaki, your last fight in the WEC, end?
I feel like it's not going to go the distance. I want to put on a show. I'm not sure how exactly, but definitely a KO, TKO or submission before time runs out.