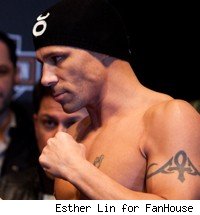 MMA veterans Ricco Rodriguez, Jeff Monson and Frank Trigg walked through their opponents Tuesday at the inaugural Israel FC card at the Nokia Arena in Tel-Aviv.

"I think both of us at 205," said Rodriguez, who picked up his tenth straight victory. "He won one, I won one, we should do it again."

The well-traveled American Top Teamer Monson was his typical self, scoring the takedown early against Sergey Shemetov and controlling from the top until securing the submission. After the keylock win, Monson reiterated his intent to move to light heavyweight.

Meanwhile, the other former UFC and PRIDE fighter, Trigg, snapped a two-fight losing streak with a first-round TKO victory over Brazilian jiu-jitsu black belt Roy Neeman. The southpaw Trigg stayed active with his hands and as his confidence grew, began to hunt Neeman down. Trigg dropped Neeman to his knees with a left hook and followed with a flurry of punches to plant Neeman to the floor for good. Trigg proceeded to throw punches until the referee stopped the contest.

In a lightweight bout, Moishe Kaitz pulled the upset over Hermes Franca. Kaitz had the better of Franca with takedowns and submission attempts until Franca's comeback in the third that saw the UFC veteran let his hands loose and bang up Kaitz. Though the third round was arguably a 10-8 for Franca, it was too little too late in the judges' eyes.

"I think I had the chance in the third round and he just survived," said Franca, who requested a rematch.

In the only fight showered with boos, Rameau Thierry Sokoudjou outpointed Valdas Pocevicius on the scorecards after three rounds. Sokoudjou dominated the first two rounds fighting safely -- and effectively -- with throws, knees and ground control. But with no sense of urgency to finish by either men in the third, the final round resembled a staring contest. Still, Sokoudjou walked away with a much-needed win coming into the fight off two straight TKO losses.

Daniel Gracie fought for the first time in four years and made quick work of Martin Wojick. Gracie tossed Wojick, hopped on his back and rode Wojick until the rear-naked choke finish.

Jeremy Knafo defeated Shonie Carter via decision and quite possibly participated in the final chapter of Carter's fight career.

"You might have very well witnessed my retirement fight," Carter said.

Carter's best shot of the fight was a left hook in the second round that floored Knafo. But otherwise, Knafo outpointed Carter in the first and outlasted Carter in the third to earn the nod.

Alexandro Ceconi, a BJJ black belt, tapped out Vitaly Shemetov with a triangle choke. Ceconi went for the armbar, slipped off, but held onto Shemetov's leg for a leglock, until finally using it to take Shemetov's back and work for the choke. Shemetov complained of the stoppage after but replays clearly showed Shemetov give one definitive tap