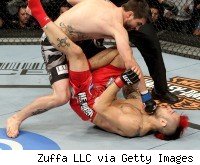 Just one week ago, Chris Lytle told MMA Fighting that he was hoping to face Carlos Condit in his next bout. The possibility is moving closer to reality.

According to sources with knowledge of the situation, the UFC is working towards putting together a Condit-Lytle bout, but a date has not yet been determined for the possible fight.

Reports that the fight would take place at UFC 126 on Feb. 5 are incorrect, according to the sources, and would likely take place at a later date.

It is a fight over one year in the making. The two had originally been scheduled to scrap in Sept. 2009 until a knee injury knocked Lytle from the bout.

Both men are in the midst of impressive win streaks. Lytle has won four straight, including his most recent victory, a unanimous decision over former welterweight champ Matt Serra at UFC 119. Condit, meanwhile, has won three in a row, including a spectacular knockout of Dan Hardy at UFC 120.

Lytle (30-17-5) has long been thought of as one of the UFC's most exciting fighters, capturing seven nightly bonus awards during his tenure in the promotion. Condit (26-5) also has a reputation as a game fighter, winning nightly awards in each of his last two fights.