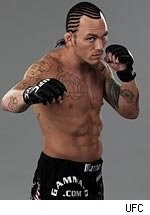 Chances are most MMA fans hadn't heard much about Vinicius Quieroz (5-2) before this week. The Brazilian Chute Boxe product made his Octagon debut at UFC 120 in London, losing via third-round submission to Rob Broughton on the unaired preliminaries.

It wasn't the greatest start to a stint in the UFC, but it wasn't deemed an offense worthy of dismissal. Not until the UFC's independent drug testing nabbed him for using the steroid Stanozolol, that is.

Then he was not only fired from the organization but also forced to forfeit "an undisclosed discretionary bonus."

The fact that he was given a bonus in the first place tells you the UFC wasn't wholly unhappy with his performance in the cage. The fact that he was fired after the positive test result tells you that the UFC really is serious about cracking down on steroid users, just as long as those users are the kind of guys it can jettison without hurting the bottom line.

Compare Quieroz's punishment with that of Chris Leben, another UFC fighter who tested positive for the exact same drug, also during an event in England, where the UFC conducts its own drug testing due to the lack of athletic commission oversight.

Leben popped positive for Stanozolol after losing a decision to Michael Bisping at UFC 89. He gave up a third of his purse and endured a nine-month suspension imposed by the UFC, and then he came back with a clean slate for UFC 102 in Portland, Ore.

Why? For one thing, Quieroz was making his debut in the organization, and getting caught cheating on your first day of work is never a good way to start. For another, Leben was a veteran of the first season of "The Ultimate Fighter" and a familiar face to many fans. That makes him a draw for the UFC, which makes him the kind of fighter who gets slapped on the wrist for a steroid offense.

In other words, Leben was too valuable to suffer any serious punishment. Not so for Quieroz.

But it's unfair to single Leben out. Plenty of other UFC fighters have tested positive in the past without losing their jobs. When it's a high-profile fighter – such as Chael Sonnen, who has yet to have his appeal heard by the California State Athletic Commission – the UFC tends to throw its hands up and claim it's powerless to level any punishment more severe than what the state-run commissions deem necessary.

Quieroz's firing suggests that's not entirely true. Clearly, the UFC has no problem coming down hard on cheaters when it's convenient. But when the guy is still a marketable, even if slightly tainted commodity, a suspension and meager fine is considered punishment enough.

It's not that I don't understand the UFC's stance. If a guy can't test clean in his very first fight for your company, he's probably not worth the trouble in the long run. And, let's admit, just the mere fact that the UFC conducts its own testing and makes positive results public is encouraging. That's more than most MMA organizations will do for events in parts of the world where there are no government officials holding out cups for fighters to pee in.

But at the same time, the double-standard on this issue is troubling. If the UFC wants to be treated like a mainstream sports organization, shouldn't it act like one? The NFL doesn't have one policy for special teams role players and a completely different one for superstars.

Maybe what we should ask ourselves is, what message is the UFC sending when it releases a rookie for the same offense that a veteran is merely suspended and fined for? Fight clean until you get some name recognition, but once you're in the main event the risk may be worth the potential anabolic benefits?

If the UFC is as serious as it claims about cracking down on performance-enhancing substance use, what it needs is a consistent policy that spells out consequences in advance. Without such a policy, the standards will remain unevenly applied, with the slack you get for cheating entirely too dependent on the tickets you sell when competing.