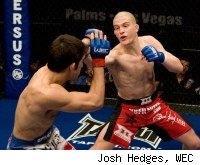 Erik Koch may have lost his big WEC 52 fight with Josh Grispi after Grispi was pulled from the bout to face Jose Aldo at UFC 125, but Koch will still get the chance to make a final impression to his new bosses before entering the UFC.

The 22-year-old Koch, nicknamed "The New Breed" is considered a rising star in the featherweight division.

Koch is 10-1 overall and 2-1 in the WEC, most recently defeating Bendy Casimir at WEC. He also holds a win over Jameel Massouh, losing only a decision to unbeaten Chad Mendes.

Rivera is 5-0 in his young MMA career, and his fight with Koch will mark his first bout in a major promotion, as all five of his previous fights have taken place in small, California-based organizations.

The Koch-Rivera fight will be part of the televised broadcast, according to Harris.

WEC 52 takes place on Nov. 11 from The Pearl at The Palms in Las Vegas. It is the penultimate event before the WEC officially merges with the UFC on January 1, 2011.