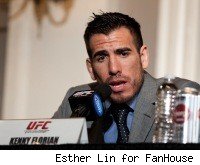 The Kenny Florian vs. Evan Dunham match which was originally scheduled for the February Super Bowl weekend event has been shifted to a January 22 event tentatively scheduled to take place at Fort Hood, Texas.

MMA Fighting has confirmed the fight's change with sources with knowledge of the situation. The news was first reported by Heavy.com.

The fight between the two lightweights had originally been announced by Florian in early October, but the UFC temporarily debated another direction, at one point offering WEC featherweight champ Jose Aldo a chance to move up in weight and fight Florian, a bout that Aldo turned down to stay in his current division.

Florian came out on the wrong side of a judges decision to Gray Maynard in a recent No. 1 contenders fight at UFC 118, while Dunham lost in a controversial split decision to former champ Sean Sherk at UFC 119 in September.

Florian is 14-5 in his career while Dunham fell to 11-1 with his first career defeat.

The Jan. 22 event is likely to emanate from the US military base in Fort Hood, Texas, though paperwork is not yet finalized according to a UFC source. Still, the event is expected to be made official shortly. It would mark the third time the UFC held an event in conjunction with a US military base. The other times were UFC Fight Night 7, held at Marine Corps Air Station Miramar near San Diego in Dec. 2006, and UFC: Fight for the Troops, held at Crown Coliseum in Fayetteville, North Carolina in Dec. 2008. The latter event raised around $4 million for the Intrepid Fallen Heroes Fund, which raises money for military members wounded in combat or the families of those lost in service.