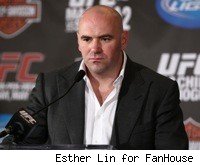 World Extreme Cagefighting is merging with its sister organization the Ultimate Fighting Championship.

In the video interview below, Dana White exclusively confirmed that the merger will take place in January 2011. In addition, White said that four UFC events will air live on Versus in 2011.

White explained the timing of the decision and what this means for all parties involved. He also provided updates on what's next for Brock Lesnar and Tito Ortiz, as well as his take on the Undertaker-Lesnar exchange following UFC 121.