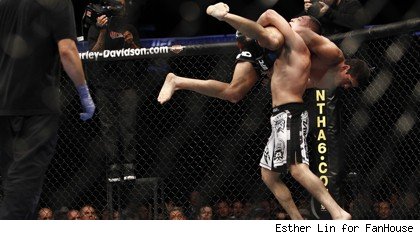 In a great battle at UFC 121, Diego Sanchez and Paulo Thiago brawled for 15 minutes before Sanchez won a unanimous decision in the best performance of his career to date.

"My motto for this camp was, Just earn it," Sanchez said afterward. "I worked very hard for this."

Thiago was absolutely relentless in the first round, connecting with punches early, taking the fight to the ground and trying for a D'Arce choke, and then finishing with a flurry of punches at the end of the round. Sanchez did bloody Thiago's nose with an uppercut, but it was definitely a 10-9 first round for Thiago on my card.

There was a good exchange of punches at the start of the second round, followed by a crazy takedown in which Sanchez grabbed one of Thiago's legs, Thiago kicked Sanchez with his other leg, and then Sanchez ended up on top of Thiago in a reverse mount position. Things got even more wild from there, with Thiago attempting submissions from the bottom, Sanchez landing strikes from the top, and the two of them briefly ending up back on their feet only to have Sanchez pick Thiago up and slam him to the ground. It was a great round of action that I gave to Sanchez, 10-9.

Sanchez took Thiago down at the start of the third round and went to town, locking in a body triangle and getting Thiago's back. Thiago never stopped fighting, broke free at times and even landed an upkick and attempted another D'Arce choke, but Sanchez finished the fight in mount, landing furious punches.