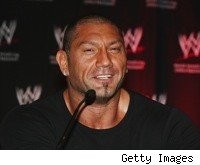 It appears as though Strikeforce CEO Scott Coker is still holding out hope that he can put together the battle of former pro wrestling stars – Dave Bautista vs. Bobby Lashley – inside the Strikeforce cage.

On Monday's episode of The MMA Hour, Coker said that the organization is still in contact with Bautista, and if both sides do ever agree on a deal, you can expect one of Bautista's first fights to be against Lashley.

"I know there's ongoing dialogue between [Strikeforce matchmaker] Rich [Chou] and Bautista, and they are trying to come to an agreement of the minds, but right now Bautista has a couple of movie offers and it's just tying up his time. Let's see where it goes from there," Coker said.

"I think that fight should happen. If we sign Bautista, why not make that fight?"

At this point, it remains to be seen whether Bautista's flirtation with MMA is nothing more than just that. We know he once told TMZ he was close to signing with Strikeforce and he has been seen training at Cesar Gracie's gym, but he wouldn't be the first pro wrestling star (see: Angle, Kurt) to sound eager to fight, only to never actually do it.

Throw in the fact that the 41-year-old reportedly told MMA Payout's Jose Mendez that he "will not be doing MMA/Strikeforce any time soon," and it seems like, for one reason or another, he has put his MMA aspirations on hold.

And what about Lashley? After his disappointing performance against Chad Griggs in August, it was unclear when or if we would ever see him fight again.

The former WWE and TNA wrestler actually returned to the sports entertainment world last month in Japan, leading to some speculation that he was going to start concentrating more on wrestling.

But Coker believes we haven't seen the last of Lashley in MMA, he just may have to work his way back up to the big show.

"The thing with Bobby is, he's a great athlete, he wants to be an MMA fighter, I mean, he is an MMA fighter, don't get me wrong, but he wants to be at that elite level where he can fight the top guys in the world. But after Chad, he's going to probably have to take, not a step back, but I would recommend to him to go to Challengers, fight three or four fights, and work your way back up."

(Ed. note: Watch the latest episode of The MMA Hour below.)