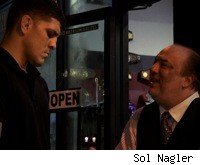 After appearing on The MMA Hour in August, it seemed inevitable that Paul Heyman, the former owner of Extreme Championship Wrestling and long-time wrestling personality, would eventually find his way into the world of mixed martial arts.

Less than two months later, the 45-year-old native of New York has officially crossed over.

"This was not a coincidence," Heyman told MMA Fighting. "I mean, could they have come to me and wanted me do their boxing game with Manny Pacquiao? Yes, they could have. Or the Madden game? Or the NHL game? I would love to do the Tiger Woods game, and I'm going to have the balls to pitch it off of the quality of the work that we did in the MMA game. I'm certainly going to pitch, 'Hey, give me the Tiger Woods. Let me work with other personalities; I'll bring their personalities out in a manner that you haven't seen before.'"

EA Sports hired Heyman to produce five promos for their upcoming video game, which hits stores on Oct. 19. The first, which can be seen below, starring Strikeforce welterweight champion Nick Diaz, was released on Friday.

This will mark the only clip involving Heyman. In the next 11 days, videos featuring Cung Le, Frank Shamrock, Fabricio Werdum and Gilbert Melendez will also be released online.

And Heyman says fans will be blown away by how the fighters will be presented in the clips.

"Not since the original Nike commercials with Michael Jordan and all the guys in the beginning has there been such a personality-centric campaign, and that's what I would like to do. I think more so than other people, that's what we can tap into here. Real personality-centric pieces and go after the guys. There's a real market out there for guys. People have become too soft in their campaigns because they took their eye off the ball.

(Want a taste of how passionate Heyman is about this project? Check out the audio of the previous quote. Wrestling fans will recognize that voice.)

As Heyman describes it, this opportunity was the perfect way for him to introduce his work to the MMA world. It also officially closes the chapter on his pro wrestling career.

That's right -- his near 30-year career in pro wrestling has come to an end. Heyman decided to turn down what he says was a "monster deal" from Total Nonstop Action Wrestling after all.

"When I shook Vince McMahon's hand in that room in December 2006 and I walked out the door, I said to myself, 'That's it.' I put in my time. I had the most extraordinary experience that a human being can have. I lived out every possible dream I could possibly live out in that industry and now I want to pursue other things.

"It came real close with TNA. To me, it was more of a deal with Spike TV and then a stock and ownership deal involving TNA. I had a five-year plan. I was going to spend 18 months building the roster, the next 18 months exploiting that built roster, that's three years in, go public in three, stay for two more running it and get out at 50 [years old]. That was my plan. I had an exit plan. I had a five-year plan and I clued everyone into it. I told TNA what my plan was and I told Spike TV what my plan was and how we would capitilaze on it and how we would make this thing move and an acknowledgement that wrestling is a diminishing market and it's not perceived as cool and here's how you, if not change course, at least present it differently so that at least you have a chance in today's marketplace to at least compete.

"When that didn't happen, that was it. I didn't have any other interest in doing it. It was close. I would have done it for that particular deal and that's it. That time passed. Now I'm looking at taking my abilities elsewhere and the logical step for me is this entry point right now both into MMA and into also just the branding world."

So when EA contacted Heyman to kick off an advertising campaign on his Web site, HeymanHustle.com, both sides got to talking about doing a little more together.

"One of the reasons why we opened the agency was to take this account because EA has been after me for a while; they were looking to do an extended campaign to promote [the game]. Again, looking for the logical progression into finding my niche in a sport that I'm a huge fan of and have an interest in and I think I have quite a bit to offer, I found a little cubbyhole that I can call my own, which is persona enhancement.

"That's what I do. That's what I did in pro wrestling, and it's something that Strikeforce doesn't do. In promoting a video game, especially in a year where the video game business took a major hit. I mean, sales are way down. Look at the UFC game, besides Red Dead Redemption, the UFC game is down anyway, and my take on it is, if you want to brand your game and you want to sell your game, you sell it on the personalities, and we know how to enhance personalities."

To be clear, Heyman isn't working for Strikeforce, he's working with EA Sports. He is still close with Strikeforce CEO Scott Coker and an opportunity to work with the San Jose-based organization could present itself in the near future. It remains to be seen whether this project will lead to more work within MMA.

After this campaign is over, his main focus will be finishing up the book he wrote with his best friend, UFC heavyweight champion Brock Lesnar, which is tentatively scheduled to be released in the spring of 2011 and his own auto-biography, which is scheduled for a summer 2011 release.

He'll of course be in attendance on Oct. 23 when Lesnar defends his title against Cain Velasquez at UFC 121.

Given his wrestling background, Heyman is aware that some fans will think he is trying to poison the purity of MMA with a little too much sports entertainment. He understands those concerns and is prepared to answer to them.

"I'm not going to try to bring pro wrestling into MMA. What I learned in pro wrestling about promotion of a persona can come with me and how to present someone as a star can come with me. But it's certainly not going to be that Fabricio kidnaps Fedor's sister and the revenge happens in their rematch at the HP Pavilion. That's not what I'm bringing to MMA. I'm bringing with me the knowledge and the lessons that I learned and how to brand the fighters that are being presented and how to brand them as stars.

"You can look at the pieces -- because all five are very different from one another -- I think you can look at these pieces as a demonstration to the MMA world that I have great respect for mixed martial arts and I have a great respect for the sensitivity that the audience may have that I can come from the wrestling world and that, in my mind, professional wrestling is alive and well and thriving today in the United States, only its name is mixed martial arts. It's the logical evolution of the business and it has evolved into the one thing that sports entertainment can't touch, which is that it's real."

So in a sign of the times, one of pro wrestling's brightest minds has officially crossed over to the real stuff. Heyman has always been viewed as a little more forward-thinking than the rest of the industry, and his latest career move exemplifies just that.

"My former associates and contemporaries in pro wrestling are upset because, 'Oh, it's real! It's terrible! You can't build stars when it's real because you never know when a nobody is going to knockout a somebody,' and to me, that's part of the game. That's part of the excitement and the exhilaration of it all."