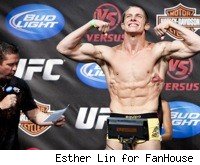 A welterweight scrap between Matt Riddle and TJ Waldburger has been added to UFC 124, a source with knowledge of the situation has confirmed to MMA Fighting.

The 24-year-old Riddle has gone 5-1 in his MMA career, with all of his pro fights coming in the UFC. He's won two straight since losing to Nick Osipczak last November, defeating Greg Soto and DeMarques Johnson.

His opponent Waldburger is only 22 years old, but already has 18 pro fights, going 13-5.

He made his UFC debut just a few weeks ago, earning a decision over David Mitchell on the UFC Fight Night 22 event.

UFC 124 emanates from the Bell Centre in Montreal, with a main event featuring hometown hero and UFC welterweight champ Georges St. Pierre defending his belt against No. 1 contender Josh Koscheck.