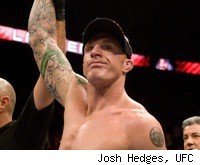 Jason MacDonald will enter the octagon for the first time since breaking his leg in a May 2010 fight when he takes on Rafael Natal at UFC 124.

MMA Fighting learned of the impending matchup on Wednesday, and Natal's management company, Dominance MMA, confirmed it in a Twitter posting.

MacDonald (24-14) is in his second run with the UFC. He was released in 2009 after losing three out of four in the octagon but returned in a UFC 113 fight with John Salter. In that fight, while defending a takedown, MacDonald suffered breaks of his left fibula and tibia that required surgery.

Amazingly, MacDonald will be back in the cage just seven months later.

Natal is 12-3, but lost to Rich Attonito in his UFC debut in a unanimous decision defeat.