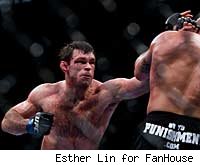 A light heavyweight fight between former champions Rich Franklin and Forrest Griffin is in the works for the UFC's card on Super Bowl Saturday, Feb. 5, which tentatively has been labeled UFC 127.

Sources with knowledge of the planned bout told MMA Fighting that the fight has yet to be signed, but is the intended direction of the promotion. Additionally, sources have informed MMA Fighting's Mike Chiappetta the battle between the two former champions is expected for that event.

The bout will likely serve as the pay-per-view's co-main event under an anticipated middleweight title fight between champion Anderson Silva and Vitor Belfort. Light heavyweight contenders Jon Jones and Ryan Bader are also expected to fight on the card. The event has not yet been announced, but is expected to take place in Las Vegas.

After failing to reclaim the middleweight title from Silva at UFC 77 three years ago, Franklin won back-to-back fights over Travis Lutter and Matt Hamill in 2008. Since then, his fights have all been against legends of the sport. Franklin lost a split decision to Dan Henderson at UFC 93, beat Wanderlei Silva at UFC 99, was stopped by Belfort at UFC 103 and, most recently, knocked out UFC Hall of Famer Chuck Liddell at UFC 115 in June.

Since his win over Lutter at UFC 83, Franklin has toggled back and forth between weights. His fights with Hamill and Henderson were at 205 pounds. He fought Silva and Belfort at 195-pound catch-weights, then moved back to 205 for Liddell.

Franklin (28-5, 1 NC, 13-4 UFC) beat the late Evan Tanner for the middleweight title at UFC 53 in 2005 and defended it against Nate Quarry and David Loiseau before losing it to Silva at UFC 64. Silva has held the title since then.

Griffin (17-6, 8-4 UFC) has not fought since a split decision win over Tito Ortiz in their rematch at UFC 106 last November. He was scheduled to face Antonio Rogerio Nogueira in May at UFC 114, but had to withdraw with a shoulder injury. Since then, he has been rehabbing that injury, as well as promoting his second book.

Griffin, the Season 1 light heavyweight winner of "The Ultimate Fighter," won the light heavyweight title at UFC 86, beating Quinton "Rampage" Jackson by decision. He lost the belt to Rashad Evans at UFC 92 in his first defense, then was knocked out in the first round by Silva in a UFC 101 superfight.

The Franklin-Griffin bout is one that has been rumored for a while. UFC president Dana White told radio station 98 Rock in Baltimore in June prior to Franklin's fight with Liddell that the winner likely would face Griffin.