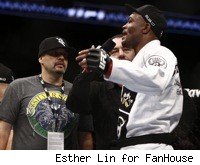 The MMA Hour returns on Monday with a loaded two-hour episode. Here's who we have lined up:

* MMA manager Ed Soares will stop by the studio to talk about the latest news involving his clients Jose Aldo, Anderson Silva, Lyoto Machida, the Nogueira brothers and others.

* Ralek Gracie, coming off his DREAM win over Kazushi Sakuraba, will make his first appearance on the show and will be breaking some major news.

* Strikeforce CEO Scott Coker will join us again to talk about Saturday night's Nick Diaz vs. KJ Noons title fight and other news related to the organization.

We'll also be giving one lucky caller a free box of 2010 Topps UFC trading cards (MSRP $70), which features two autographs and two memorabilia cards per box. The contest is open to legal residents, who are 18 years of age and over, of the United States (including the District of Columbia). Click here for official rules.

Download this show and previous episodes of The MMA Hour on iTunes here.

The MMA Hour begins below beginning at 1 PM ET.