Jerome Le Banner Gives Up, Walks Off During K-1 Fight With Kyotaro 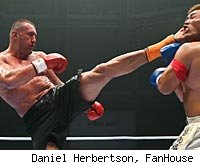 In one of the strangest endings you'll ever see in any sporting event, K-1 legend Jerome Le Banner fought a brutal three-round battle with his opponent Kyotaro, then walked out of the ring and refused to fight a fourth overtime round when the judges ruled the first three rounds a draw.

As a result, Kyotaro was ruled the winner of the match by forfeit. So Kyotaro wins at the K-1 World Grand Prix 2010 Final 16 in Seoul and will advance to the Final 8 in December.

Le Banner's actions were, frankly, disgraceful, and they marred what had been a great fight. He apparently thought he had deserved to win the fight in the first three rounds and the judges had robbed him, but he was wrong: Although Le Banner definitely won the second round, he clearly lost the third, and the first round was close enough that it was reasonable to call it a draw. The judges' decision to call it a draw through three rounds and send it to overtime was completely acceptable.

(MMA FIghting's Daniel Herbertson contributed to this report from Seoul.)