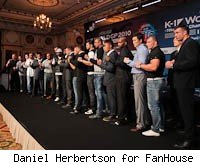 SEOUL - All 46 participants have gathered in Korea for the K-1 World Grand Prix 2010 Final 16 and the K-1 World MAX Final 16 to be held on Oct. 2 and 3 respectively at the Olympic Gymnasium 1st.

As expected former UFC heavyweight champion Andrei Arlovski and Ruslan Karaev were both absent with K-1 President Sadaharu Tanikawa finally officially confirming that they are out of their bouts due to injuries sustained in training.

"I would like to apologize to the press and the fans in the Korea and around the world – about 10 days before this press conference, Ruslan Karaev had to (withdraw due to injury) and also many people had been expecting Andrei Arlovski, the former champion of the UFC, but he was also injured during sparring about a week ago. We had been trying to convince (Arlovski) to come over for this event but due to the doctor's opinion we had to cancel his participation as well. I would like to apologize for these changes."

Ray Sefo will step in for Karaev to face Tyrone Spong and Mighty Mo will replace Arlovski against Raul Catinas. Sefo has rebounded from a six fight losing streak in 2007/8 to win his last three K-1 bouts while fan favorite Mighty Mo has gone 2-7 in his last nine outings.

The World MAX event will only feature five "Final 16" bouts as Albert Kraus, Yoshihiro Sato and Yuichiro "Jienotsu" Nagashima have already moved on to the 2010 MAX Final 8 with their victories back in May.

The Oct. 2nd K-1 WORLD GP will be broadcast live on HDNet from 2 AM Eastern time while the October 3rd K-1 MAX event will be streamed online for free via K-1's official site from 2AM Eastern time.